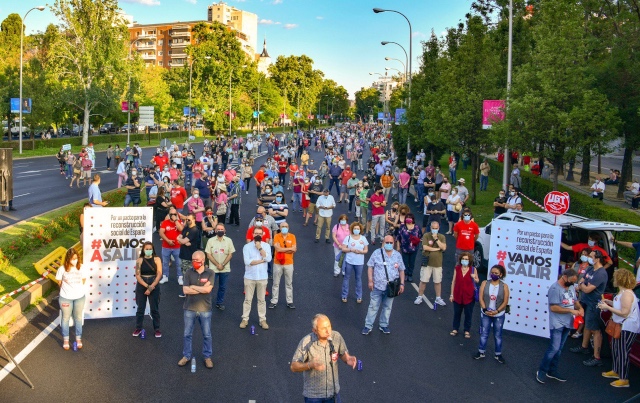 Called by the Workers Commissions and UGT unions, rallies took place throughout the day in some 60 towns and cities with organisers saying “many thousands” had taken part, without giving a figure.

Unions are demanding a concerted response to ensure social and economic reconstruction following a crisis that has dealt a hammer blow to Spain's economy.

“We want the country to be rebuilt, we need a national agreement so this pandemic won't be politically exploited,” UGT boss Pepe Alvarez told AFP in Madrid, where more than a thousand mask-wearing demonstrators held a socially-distanced march.

“We need to improve public services as part of a national agreement that leads to recovery and an improvement in our economy.”

Although the government had done “more than any government before” through its furlough scheme and introducing a minimum basic income, there were still many people “who are really suffering”, he said.

Demonstrator Ana Sanchez de la Cueva, 61, told AFP the aim was to ensure that ordinary people don't end up paying for the crisis, either economically or in terms of their health.

“There are two reasons we're here: to call for a proper economic recovery so we can all emerge from this crisis with dignity, and to demand that public services be strengthened,” she said.

“We will only get out of this crisis if we all pull together and don't leave anyone behind.”

The unions also called for end to the political infighting that has blighted the leftwing government's efforts to manage the crisis, which has drawn blistering attacks from its rightwing opponents.

The economic stoppage after Spain went on lockdown in mid-March, to slow the spread of the virus, has left hundreds of thousands of people jobless.

It has also triggered a rapid rise in poverty that has outstripped that of 2008 when the property bubble burst.

By the end of March, Spain's unemployment rate had risen to 14.4 percent, but could hit 19 percent by the year's end, the government has said.

Bank of Spain figures also suggest the economy is likely to contract by up to 13.6 percent in 2020 as a result of the deadly pandemic.