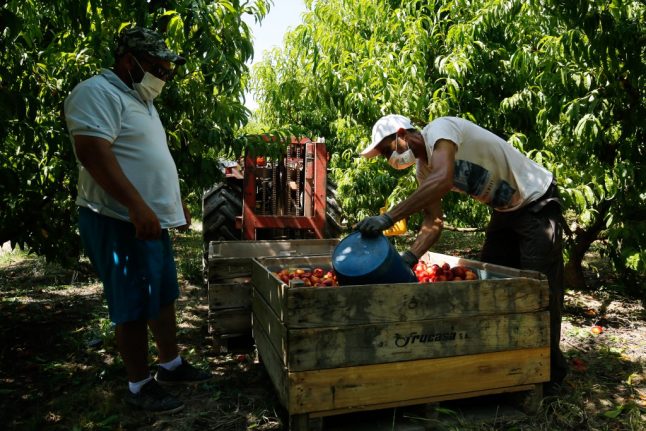 After a long day in the sun, he's exhausted but when he finally clocks off, he must have his temperature taken before entering the sports hall where he's staying — the complex has been set up especially for seasonal workers following a flareup of the virus.

Thousands of immigrant workers come to this fertile valley in the Aragon region every year but a fresh outbreak of infections has worried the authorities.

To tackle the problem, the small town of Fraga on Thursday opened temporary accommodation for up to 50 workers who had been sleeping outside , as well to help detect new cases of COVID-19.

When Doumbia arrives, a Red Cross worker scans his forehead with an infrared thermometer, then he must disinfect his shoes and his hands.

After showering, he can have a hot meal then sleep in one of the halls' well-spaced beds, with lights out at 10:00 pm and breakfast served from 5:00 am.

“Some are working, others are looking for work,” said Red Cross official Oscar Gracia.

“Some get very emotional, saying that at last they have a roof over their heads and a plate of hot food.”

Many homeless fruit pickers travel around the country seeking work according to the season.

Mame Cisse, a lean 34-year-old in a grey t-shirt, arrived from Senegal two years ago and so far this season, he's earned earning six-euros-per-hour for picking onions in Albacete, and eight for picking olives in Huelva, both areas in the southeast. Spain has been badly hit by the virus, suffering more than 28,300 deaths, and the state of emergency had only just been lifted on June 21 when a new outbreak was detected at a fruit farm near Fraga which has been forced to close.

On Thursday, the health ministry said 250 cases had been identified in the area, almost all among seasonal workers, as the World Health Organisation warned of a resurgence in Europe since restrictions were eased.

After 14 weeks of lockdown but only one death, Fraga has had to reimpose some restrictions, banning gatherings of more than 15 people and visits to elderly care homes.

But mayor Carmen Costa said it was important “not to stigmatise the seasonal workers”.

“We need them to come and work, we need them as much as they need us,” she said.

“We can't have people sleeping in the street, especially not with the current health concerns.”

There are around 1,000 agricultural holdings in the area, and 80 percent of produce is earmarked for export with a market value of 60 million euros, says Ignacio Gramunt, director of mercoFraga which helps market the produce. On his farm, he employs 10 Bulgarians, all wearing masks and carefully spaced as they pick nectarines destined for Germany.

Also staying at the sports hall is Faye, a 43-year-old Senegalese national who has been sleeping rough for a month.

All he wants is to be able to work legally, addressing his plea to Spanish Prime Minister Pedro Sanchez.