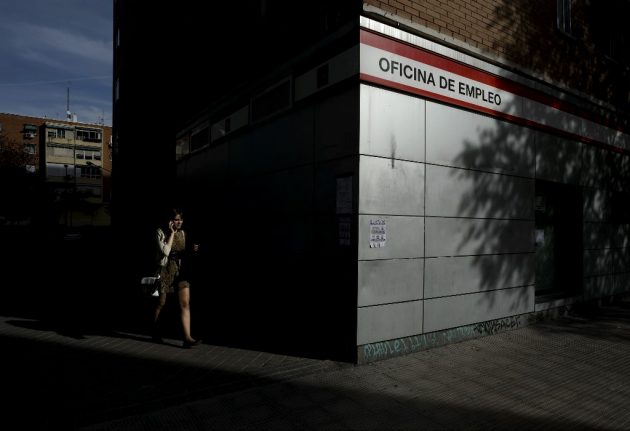 A woman walks outside a government job centre in Madrid before the pandemic. Photo: AFP

This agreement “is a guarantee of certainty and stability for both workers and companies,” tweeted Labour Minister Yolanda Diaz of the hard-left Podemos party, the junior partner in Spain's leftwing coalition government.

The move extends by three months the furlough scheme (known in Spain as ERTE, Expediente de Regulación de Empleo Temporal) which was set to finish at the end of June.

A commitment to fund such temporary unemployment schemes was one of the key measures put in place by Prime Minister Pedro Sanchez's government to bolster the economy, which was paralysed by nearly three months of lockdown.

The government also banned layoffs in the six months after the end of the furlough scheme, although cutbacks are expected.

ERTE: What you need to know about losing your job during Spain's coronavirus crisis

A total of 3.7 million people benefitted from the government's furlough scheme between mid-March and the end of May, labour ministry figures show.

Spain's unemployment rate, which jumped to 14.4 percent by the end of March, could rise as high as 19 percent by the year's end, the government has warned, while the Bank of Spain estimated the figure would be between 18.1 percent and 23.6 percent.

Talks to extend the measure were hard-fought, with business leaders seeking an extension until the year's end while the government tried to ease the impact on the public purse which has taken a hammer blow from the economic hibernation triggered by the virus crisis.