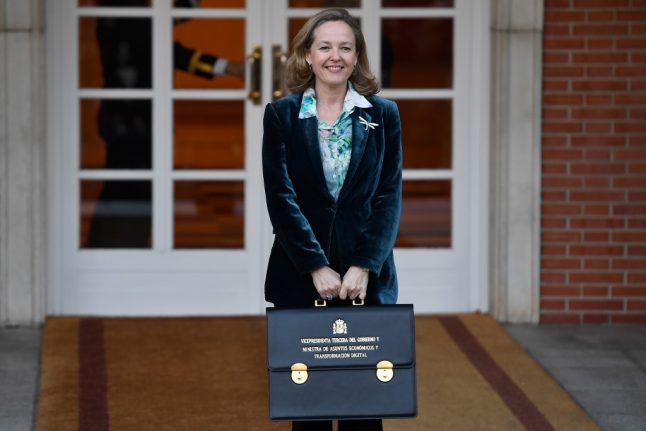 Prime Minister Pedro Sanchez said that if she is chosen, it would be the first time that a woman and a Spaniard would lead the EU institution.

“It would be an honour for the Spanish government… that Nadia Calviño be head of the Eurogroup, a crucial organ for cooperation and the reconstruction of a stronger Europe,” Sanchez said on Twitter.

The government said it would formalise the candidacy Thursday, the deadline to nominate candidates to succeed Portugal's Mario Centeno.

The appointment is due to be announced on July 9th.

Among others cited as possible candidates are Pierre Gramegna of Luxembourg and Ireland's Paschal Donohoe.

The head of the Eurogroup can play a key role in chairing meetings and setting the agenda for the 19 members of the single currency zone to ensure economic policy is coordinated as much as possible.

The immediate task will be to help organise the response to the coronavirus crisis which has devastated the European economy.

Calviño joined Sanchez's first Socialist government in June 2018, coming from the European Commission in Brussels where she had worked for 12 years.

Known as a technocrat and a moderate, not a politician, Calviño said she hoped to continue to work towards “a strong and prosperous eurozone for the benefit of the citizens of Europe.” Who is Nadia Calviño?

In June 2018, the conservative El Mundo daily hailed Calviño's entry into government as “one of (Sanchez's) most applauded appointments”.

Although she had no previous political experience, Calviño had worked at the European Commission since 2006 where she was director-general of the budget department, a major job in Brussels.

With her technocratic profile, naming her as economy minister was a bid to charm the European Union and the markets — and it worked.

Former top European diplomat Javier Solana of Spain has described the 51-year-old as full of “energy” and “seriousness”.

And France's Olivier Bailly, who served as chief of staff to former European commissioner Pierre Moscovici, described her as a “firm advocate for the European project”.

A lawyer and economist by training who also speaks English, French and German, she is “a guarantee that Spain will keep increasing its weight within European institutions,” Santander Bank chairman Ana Patricia Botín said.

Known for her composure, smiles and measured tone when speaking, Calviño cut her teeth in Brussels in 2006 at the EU's powerful competition authority before moving to its internal markets directorate, working first under former European Commission president Jose Manuel Barroso and then Jean-Claude Juncker. Calviño next to US businessman and politician Michael Bloomberg and Spanish Santander Bank executive chairperson Ana Botín at the UN Climate Change Conference in Madrid in 2019.

Described by El Pais newspaper as a “social liberalist” who is “politically neutral”, she previously held various technical roles at Spain's economy ministry under the conservative government of Jose Maria Aznar (1996-2004) followed by the socialist administration of Jose Luis Rodriguez Zapatero (2004-2011).

Born in A Coruña, a city in the northwestern Galicia region, Calviño grew up in Madrid and graduated with a degree in economics, qualifying in law 10 years later.

Although her appointment was aimed at sending out a message of stability, Sanchez's first government only held a slim majority and its term was beset by political strife.

When his new administration took office in January, a minority coalition government with the far-left Podemos, Sanchez named Calvino as one of his four deputies with responsibility for economic affairs.

Within government, she has been a moderating factor, a defender of budgetary prudence to counterbalance the influence of Podemos ministers.

She has shown noticeable reluctance over the repeal of a controversial 2012 labour reform that made it easier to fire workers, a step long-sought by Podemos.

“Her critics say she gives little in negotiations,” El Mundo wrote in 2018, describing her as “intelligent, hardworking, a perfectionist with a high level of technical competence, and a firm-but-friendly type who always smiles”.

Married with four children, Calviño is always immaculately turned out and very fond of decorative pins and brooches which she wears on her lapel, often in the shape of different animals.