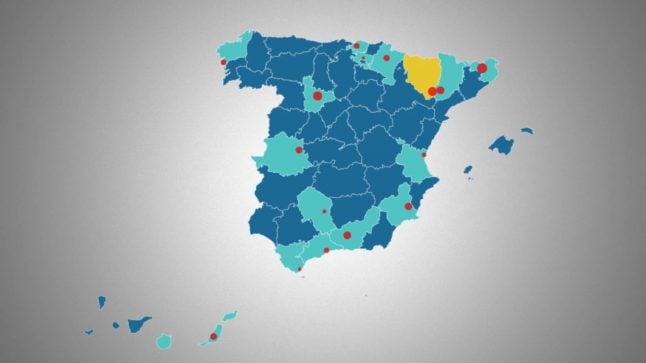 Since Spain began allowing cross-regional travel for its citizens and opened its borders to tourists from the EU on June 21st, numerous Covid-19 outbreaks in different parts of the Spanish mainland and its islands are leading some to question whether the lockdown ended too soon.

On June 26th the country’s Health Ministry announced there have been new Covid-19 outbreaks in A Mariña in Spain 's Galician Lugo province, in Huelva in southwest Andalusia and in Orio in the Basque Country.

Most worrying of all are the increases in Covid-19 cases in Málaga, which have gone from 9 on Tuesday to 83 on Friday, and the spike from 25 to 250 cases over the same three-day period in the four districts of the Aragonese province of Huesca (Cinca Medio, Bajo Cinca, Bajo Aragón-Caspe and La Litera), where local authorities have made residents return to Phase 2 to contain the high number of infections.

The Spanish government, eager to kickstart the country’s ailing economy and rescue its all-important tourism industry, said on Tuesday it hadn’t ruled out reinstating the state of emergency again and returning to the different phases of de-escalation if it felt limiting citizens’ movement was necessary again.

Spanish Foreign Affairs Minister Arancha González Laya echoed her government's message regarding international tourism, stating that “it hasn't been ruled out that some freedom of movement might have to be reversed”, although she added that until there is a vaccine or treatment, outbreaks are inevitable.

The following map shows where in Spain all these new outbreaks are on June 26th, as well as the provinces that have recorded no new outbreaks since June 21st and those that have. The map below shows the number of Covid-19 infections recorded across Spain on Tuesday June 23rd.