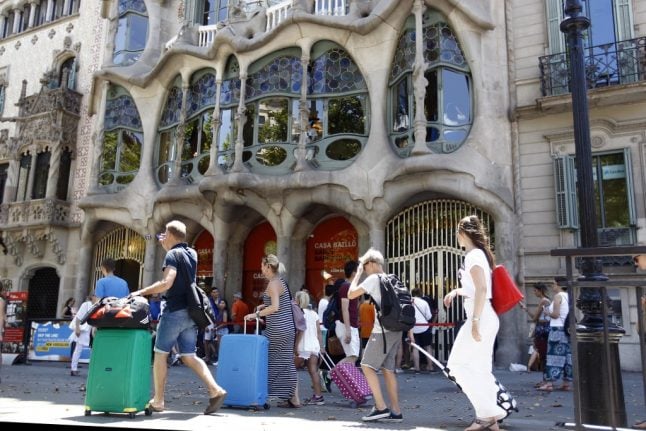 Spain may be currently trying to prevent a resurgence of Covid-19 since it ended its state of emergency and opened its borders to EU tourists on July 21st, but not far on the horizon looms the dilemma of whether to allow American travellers into the country this summer.

The United States has had more than 2.2 million Covid-19 cases and 120,000 deaths, figures which the latest reports suggest will push EU officials to prevent American travellers from entering the bloc on July 1st.

But in Spain’s case, where tourism represents 14.6 percent of the country’s economy and is responsible for providing work for 2.8 million people, the decision of whether or not to ban US tourists is likely to be harder than for other countries.

In 2019 some 3.3 million US tourists visited Spain, a figure that’s risen by more than a million since 2016 according to the Iberian nation’s National Statistics Institute (INE).

Spain is the fourth most popular EU destination among American tourists after Italy, France and Germany, but those who do come to Spain like it so much that they return. According to a 2015 survey by Spanish tourist stats agency Frontur, 67 percent of US tourists who travelled to Spain that year were on their fourth visit to the country.

Spain is particularly popular among residents of New York, California, New Jersey, Texas and Florida, according to data from the United States Department of Commerce.

Another survey by Spanish tourism spending agency EGATUR found that the main activities carried out by American tourists in Spain were largely cultural, followed by nightlife and gastro-tourism.

Their favourite time of year to visit Spain appears to be spring. Between April and June of 2018, 20 percent of foreign tourists who visited Spain came from the United States, according to the Expedia group. A tour guide talks to a group of tourists in Madrid. Photo: AFP

So how important is US tourism to the Spanish economy?

The 3.3 million Americans who came to Spain in 2019 may make up a small percentage of the record 83.7 million international visitors the sun-soaked country received last year, but US visitors did contribute €5.8 billion through their Spanish holidays.

According to tourism shopping tax refund company Global Blue, before the global pandemic Americans were spending more in Spain than ever before: up 53 percent in 2019 compared to 2018.

However, the US’s role in the Spanish economy extends far beyond tourism.

The United States was the biggest foreign private capital investor in Spain in 2018 according to Transactional Track Record (TTR), pumping in over €10 billion in 39 major operations. That also put Spain among the top ten foreign countries in which the United States invests.

The same applies to risk capital, where the US invested €292 million in Spain in 2018, more than any of its European neighbours.

With Spain’s Institute for Foreign Trade ICEX referring to the global superpower as the country’s main partner outside of Europe, it’s possible that restrictions on US travel to Spain will contribute, directly or indirectly, to a slower recovery of the Spanish economy.