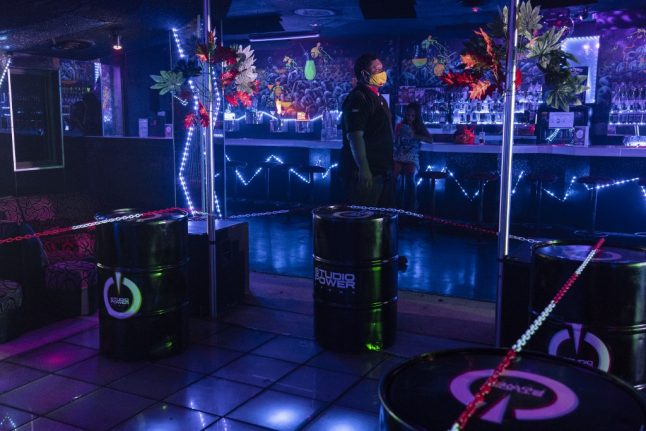 “We want to dance” the nightclubs said in a statement in response to a U-turn by the Catalan regional government on the issue. It had lifted the dance ban in discos and nightclubs last week as Spain eased one of Europe’s most strict set of coronavirus virus lockdown measures.

But on Monday, officials backpeddled on the decision, saying night clubs would have to keep people off the dance floor, if necessary by putting tables and chairs there.

Dance floors in hotels and restaurants were allowed to stay open, but only if they were used by “groups of people often together and in close contact.”

Social media had a field day with the decision, but disco owners who have been hoping to open again were not amused. “They stop us from dancing even though that is what we all like the most,” Ramon Mas, head of the Barcelona discotheque federation told a regional parliament hearing.

“A night club without dancing is like an opera without music or a restaurant without food,” Mas explained, before concluding that “we will not reopen if we cannot let people dance.” The head of another organisation, Spain Night Life, told AFP the rule would just favour illegal clubs.

“Knowing the level of relations between one person and another impacts their privacy and an entrepreneur cannot be a part of that,” Joaquim Boadas added. He argued for having people dance with masks.

Spaniards were set to celebrate after a confinement decreed in mid March was finally lifted last weekend. Spain has suffered more than 28,300 deaths from Covid-19, one of the highest tolls in Europe. People are still supposed to maintain a distance of 1.5 metres from each other, or wear a mask when that is not possible.