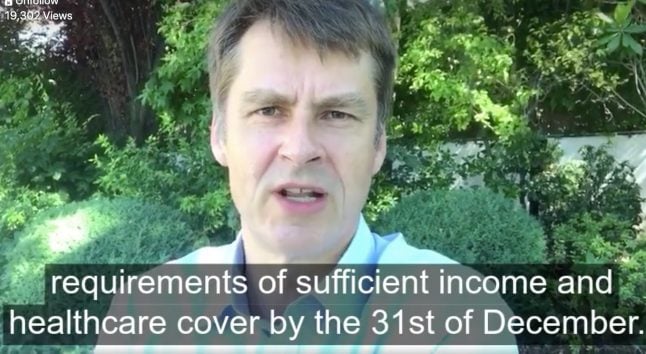 HMA Hugh Elliott made the announcement on a social media video posted to the Brits in Spain group in which he addressed questions that the British Embassy has received recently regarding residency in Spain post-Brexit.

“Your rights as UK nationals in Spain will be guaranteed, not by possession of the Residence document itself, but by your being legally resident in Spain before the end of the Transition Period,” Hugh Elliott explained.

“That means living in Spain and satisfying the current residency requirements of sufficient income and healthcare cover by December 31st.”

The British Ambassador acknowledged that there was a “backlog due to Covid” for residency appointments at Spain’s public administrations but reminded Brits in Spain that they do still have six months, that “appointments are opening up” and urged anyone who doesn’t have a green residency document already to register as soon as they can.

However, Hugh Elliott also announced that the new Tarjeta de Identidad de Extranjero or TIE card for British residents in Spain is likely to be introduced very soon.

“We understand this will be introduced from July,” he said.

“This will be a photo card which explicitly mentions your rights under the Withdrawal Agreement,” suggesting that it may slightly differ from other TIE cards issued to non-EU residents in Spain.

There still appears to be a lack of clarity over whether the TIE card will permanently replace the previous green residency documents, as Elliott explained: “You may choose to exchange your current green certificate for a TIE in due course, but that’s not obligatory”.

“Whether you have the green A4 certificate, the green credit card-sized version, and whether they say permanente or not, or whether you get a TIE in the future, all remain equally valid in demonstrating your rights as a beneficiary of the Withdrawal Agreement, even after the end of the transition period.”

Overall, HMA Hugh Elliott’s message to his fellow Brits in Spain was one of reassurance at a time when worries over the looming Brexit date have been further aggravated by the uncertainty caused by the global Covid crisis.

“Please remember that citizens’ rights are already protected by the Withdrawal Agreement between the UK and the EU, which came into force at the end of January.

“This guarantees your rights. As long as you’re legally resident here by the end of 2020 you can continue to live your lives broadly as before.