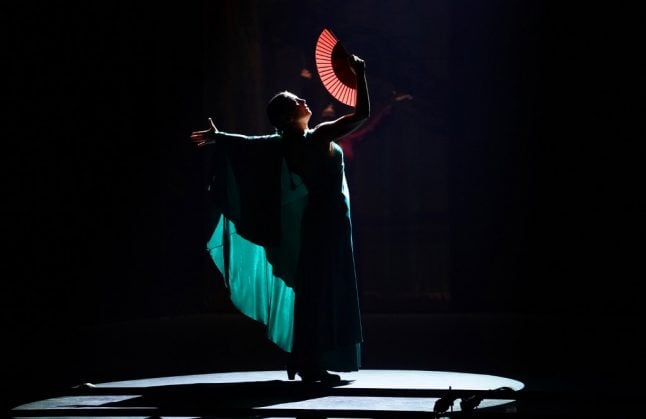 Sara Baras during a performance in 2019. Photo: AFP

After 32 years, the curtain has finally fallen at Madrid's Casa Patas flamenco club, its vibrant shows silenced by the epidemic which has dealt a dramatic blow to Spain's flamenco 'tablaos'.

Hugely popular with tourists, these flamenco clubs say the pandemic has put them “at risk of extinction” and are urgently seeking government help to ensure their survival.

“If they don't help us, the flamenco tablaos will disappear,” warned Federico Escudero, head of ANTFES which represents around 100 clubs across Spain that employ 3,400 people and have been shuttered since mid-March.

With the epidemic now well under control and Spain's economy slowly picking up steam, ANTFES says the very future of these clubs — which provide work for “90 percent of flamenco artists” — is at stake.

Added to the UN's list of intangible cultural heritage in 2010, flamenco is a high-octane form of dance accompanied by guitars and singing that was born centuries ago among the poor gypsies of southern Andalusia.

For these tablaos, which take their name from the raised wooden floor that reverberates with the clacking heels of the dancers, the global lockdowns wiped out all foreign tourism — from which they draw up to 90 percent of
their income.

Although Spain is just a day away from ending its months-long state of emergency, its borders will only be gradually reopened, with European tourists allowed in from Sunday and everyone else from July 1st.

But these clubs, which offer intimate shows with a handful of artists — dancers, singers, guitarists, the cajon (box drum) players and the rhythmic clappers — in smaller spaces will also find it difficult to adapt to new social distancing norms.

In this sense, the closure of Casa Patas at the end of May is just “the tip of the iceberg”, a warning of what may lie in store and a “harsh wakeup call” for the sector, says the club's owner Martin Guerrero (pictured below). “We have no international clients.. and without that and with earnings amounting to between 10 and 20 percent of normal levels, it makes it impossible to open,” Guerrero told AFP.

Opened in 1988 in the Lavapies neighbourhood, Casa Patas is widely seen as a “temple” of flamenco in Madrid.

A typical tablao it features a small stage in a small room, with 120 chairs packed in very closely, making it impossible to “balance the books” if the venue's capacity is limited, he says.

Inside the now silent venue, the walls are lined with photos of flamenco greats who have performed there — singer Diego El Cigala, dancer Sara Baras, gypsy guitarist Tomatito — as well as regular visitors like the late guitar legend Paco de Lucia.

For Guerrero, closing has been “very difficult to cope with”, particularly as he has had to let go of 25 staff, including some who had spent over two decades working there.

Standing next to a huge picture of his late father, who set up the club, Guerrero admits he is really missing its “fantastic atmosphere”.

“This is a bar in which you could meet artists, fans, gypsies, people from Andalusia, from Madrid, flamenco students and tourists from all over the world,” he says.

In Barcelona, Mimo Aguero is hoping to avoid a similar fate for the Tablao de Carmen, which opened three decades ago in honour of legendary flamenco dancer Carmen Amaya.

“Until the tourism gets back to normal, to the pace it was before, we won't be able to open,” admits Aguero who runs the club.

“And if the government doesn't help us, we don't know what we're going to do.” 'In danger of extinction'

In a bid to save the sector, ANTFES has been lobbying the government to extend its furlough scheme for tablaos until the year's end and for subsidies to cover the lack of tourists under a campaign called “Flamenco in danger of
extinction”.

It is also asking the government to drop its capacity restrictions that are aimed at avoiding any new outbreak — or “95 percent of tablaos will have to close”.

So far, the flamenco sector says it has had no response from the government of Socialist Prime Minister Pedro Sanchez who has already extended help to cultural venues such as museums, cinemas and opera houses.

But even though the tablaos are facing an existential crisis, flamenco itself “is very much alive” as part of popular culture in Andalusia and other regions of Spain, Guerrero says.

And its artists will continue to appear at traditional events, fiestas and festivals, their emotionally-intense art form supported by institutions like the Casa Patas Foundation, whose conservatory and rehearsal space will both
keep working, Guerrero says.