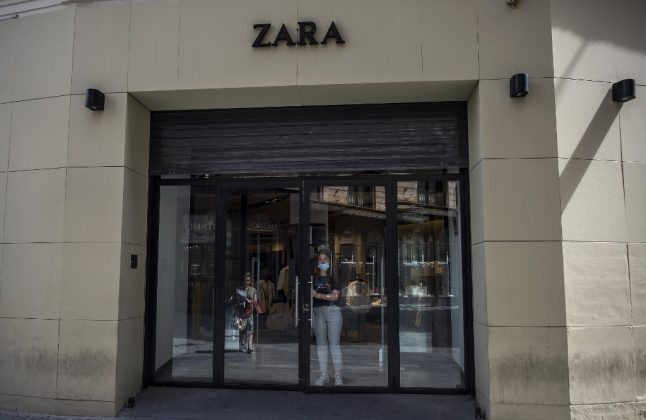 Inditex said on Wednesday it would focus on growing its online business after posting its first Q1 loss in nearly 20 years as the pandemic devastated sales.

The clothing empire started by Spain's wealthiest person Amancio Ortega said it would “absorb” between 1,000 and 1,200 of its smaller stores into its online operations, with losses mainly incurred among older stores from brands that weren't Zara.

Inditex's “headcount will remain stable”, the group said, with staff likely to be offered other positions relating to the dispatch of online purchases.

“The COVID-19 pandemic has had a material impact on our operations as lockdown and restrictions have been in place in most markets,” executive chairman Pablo Isla told analysts.

The textile giant posted a first-quarter loss of €409 million, compared with a net profit of €734 million in 2019, in what was its first loss since it went public in 2001.

The figure included a provision of €308 million for work in its shops which was already under way before the crisis took hold.

Inditex, which has nearly 7,500 stores across the world(only 965 of its stores were open during the lockdown), has expanded at a rapid rate over the past decade and a half opening stores in 96 different countries.

Sales plummeted by 44 percent to €3.3 billion ($3.7 billion) from €5.9 billion a year earlier, with the group closing up to 88 percent of its stores at the height of the lockdown, among them Zara, Massimo Dutti, Bershka, Oysho and Pull&Bear.

But online sales, which accounted for 14 percent in 2019, posted strong growth of 50 percent during the first quarter, and even increased by 95 percent year-on-year in April, the company said.

Analysts with Bankinter said the results showed the “severe but temporary” impact of the virus crisis.

“The group has maintained its sales growth objectives of 4.0 to 6.0 percent over the long term and has demonstrated the solidity of its model with a solid cashflow and a 21 percent reduction in operational costs,” they said.

Inventory levels were 10 percent lower at the April close, with Inditex saying it demonstrated the “flexibility” embedded into its business model which allowed it to react to actual demand, meaning production levels stayed close to real sales.

Despite the crisis, “we have total confidence in our business model” and will “continue developing our long term strategy to extend our fully integrated stores and online platform,” Isla said.

Since 2012, Inditex has invested around 2.5 billion euros in a strategy aimed at reinforcing its online sales by reducing its stock of smaller older shops and investing in larger stores in high-profile locations.

The group said it would invest an extra 2.7 billion euros between 2020-2022, of which around 1.0 billion would be directed solely into its online business to ensure its full integration with the shop floor.

“Better quality stores will play a stronger role in the development of online sales,” said Isla.

For example, a customer unable to find their size in store will be immediately able to access it online.

By 2022, online sales are expected to account for over 25 percent of its overall sales, compared with 14 percent in 2019, it said.

The textile giant also gave a brief glimpse at its second-quarter activity, saying sales were down 51 percent in May and off 34 percent in the first week of June.

In mid-March Inditex suspended its dividend, but said Wednesday it would make a payout on November 2 of 0.35 euros per share.