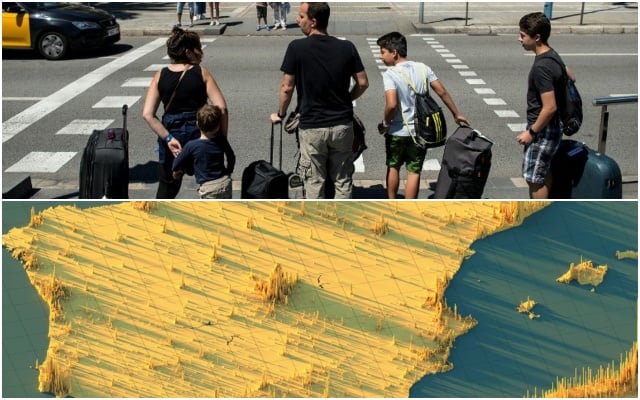 As Spain prepares to open its borders to foreign visitors on July 1st, the question of where to safely spend one’s summer holidays and where the virus is still circulating will be at the back of many tourists’ minds.

According to the latest government data, only 48 infections were recorded across Spain on June 9th, the lowest daily contagion figure since March 5th.

Spain has overall seen a sizeable regression in cases as a result of its two-month lockdown which started on March 15th as well as its gradual de-escalation plan which began on May 11th.

FIND OUT: The cheapest and most expensive cities to visit in Spain this summer

And yet Spain’s overall Covid-19 balance sheet has been one of the world’s worst: 241,966 confirmed cases through PCR tests and 27,136 deaths as of June 9th.

The following map provides this Covid-19 infection/fatality information for each of Spain’s 17 autonomous communities, which as expected shows how densely populated Madrid (69,804 infections/8,691 deaths) and Catalonia (59,232 infections ,587 deaths) top the tables in this regard.

Less populated regions such as Murcia in the southeast as well as Asturias and Cantabria along Spain’s northern coast have had some of the lowest numbers of infections (all under 2,500 per region) and yet parts of Spain with a high population density such as Mallorca/Balearic Islands and the Canary Islands have managed to contain the virus to a large extent.

Both archipelagos are preparing to test their response to the arrival of tourists ahead of July 1st, with the Balearics already confirming the potential arrival of 11,000 German tourists (revised up from 6,000) on June 15th.

Population density is of course only one factor in determining how likely visitors are to come into contact with people with Covid-19 (Spain’s sparsely populated region of Castilla y La Mancha has for example been one of the hardest hit by the pandemic).

But for those who feel like they would rather get away from the crowds and not risk potential exposure, the following two maps illustrate how Spain is a land of population contrasts – some areas are virtually empty and others are packed. The map above by data visualisation site Metrocosm shows where the population peaks are, whilst the one below illustrates the vast divide in population between the so-called 'two Spains', as small pockets across the country make up 50 percent of Spain's 47-million strong population A study by researchers at Madrid’s Carlos III University has also identified the areas of Spain that are most vulnerable to a new outbreak, with variables other than population density.

Using indexes such as the percentage of high-risk people per region as well as the safety measures and availability of resources in hospitals, pharmacies or supermarkets, they’ve concluded that Castellón near Valencia and Cantabria and Gipuzkoa in the north are the most vulnerable while Toledo, Segovia, Salamanca and Navarra in the interior are the most short-supplied. Using the R value (the rate of transmission/the number of people that each infected person infects) for each of Spain’s 50 provinces and the mobility of people within each of these, they’ve found that as of June 9th areas in Spain’s interior surrounding Madrid – Albacete, Toledo, Ávila and Ciudad Real – are most at risk of suffering a new outbreak, together with Castellón on the east coast and Huesca and La Rioja in the northeast.

On the other hand, popular tourist areas such as Murcia and Almería on Spain’s southeast coast and Asturias as well as parts of Galicia in Spain’s green northwest are less at risk.

Referring back to the earlier maps in this article, it can be seen that these are some of Spain’s most sparsely populated, making them in many ways suitable destinations for tourists this summer.