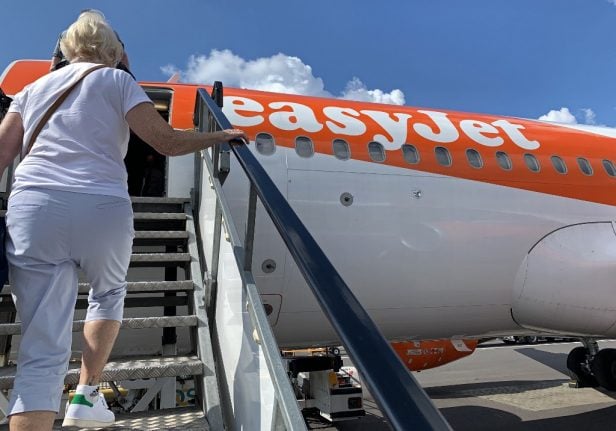 Easyjet will fly to destinations such as the Balearics and the Canary Islands from July 1st. Photo: AFP

The reopening of Spain's borders for this date applies to European tourists from EU member states and the Schengen area, as well as those from the UK (the Irish government is still advising its citizens not to book holidays abroad, as is Norway until after August 20th).

In fact, the demand for flights and holiday packages to Spain among eager British holidaymakers increased by 42 percent after the Spanish government advanced the opening date and announced that people travelling from the UK would not have to spend 14 days in quarantine.

According to the price comparison site Travelsupermarket, online searches for trips to Mallorca increased by 96 percent, 51 percent for Gran Canaria, 46 percent for Benidorm and 28 percent for Tenerife.

Ryanair was quick off the mark after the Spanish government’s announcement, bringing forward operations to coincide with the start of the ‘new normal’ in Spain and the opening of its borders on June 21st.

So far it’s averaging one in four of its usual operations, with reports suggesting Brits have already landed in the Canary Islands, Málaga, Valencia, Mallorca and Alicante.

Ryanair’s FAQ page which reportedly gives up-to-date information on which Spanish airports they’re flying to is here, although is working haphazardly. Ryanair announced in late May it would operate 40 percent of its usual 550 flight routes to Spain from July, although ongoing global developments regarding new outbreaks could have an effect on this.

Low-cost competitor Easyjet hasn’t followed suit, sticking to its initial plan to resume 50 percent of its flights on July 1st from UK airports to destinations such as the Balearics and the Canary Islands.

It hasn’t yet specified when it will resume operations to its other Spanish destinations, including Madrid, Barcelona (Reus Airport), Málaga, Alicante, Murcia, Santiago de Compostela, Almería, Seville, Valencia, and Bilbao, although it has previously said it would increase its overall flight frequency by up to 75 percent in August.

On June 25th , the German airline and tour operator announced that from July 11th it would start flying from the UK to its Spanish holiday destinations of Tenerife and Lanzarote in the Canary Islands and Mallorca and Ibiza in the Balearics.

A total of approximately 22 weekly flights will be leaving from London Gatwick, Manchester and Birmingham initially, and from East Midlands airport on July 17th.

Spanish low-cost airline Vueling is planning a big restart of its operations in July but the only UK-Spain route so far confirmed is Barcelona-Manchester from July 13th.

The latest from British low-cost leisure airline Jet2 – which flies to the Canary Islands, the Balearics and the Costa Brava – is that it had postponed its restart of flights from the UK to Spain until July 15th.

The latest from British Airways is that they planned to resume 50 percent of their flights to Spain from July (prior to the announcement that Spain’s borders would open on June 21st).

Spanish online daily 20 minutos reported on Sunday that 21 UK tourists were not allowed to board a BA flight from London to Madrid, while British residents were. This was blamed on a lack of information between the Spanish government and the airline.

Spanish airline Air Europa said it would gradually resume its flights to and from European destinations from mid July.

Wizz Air, one of the first airlines to restart flights in June, plans to resume almost all its operations to and from Spain in July.