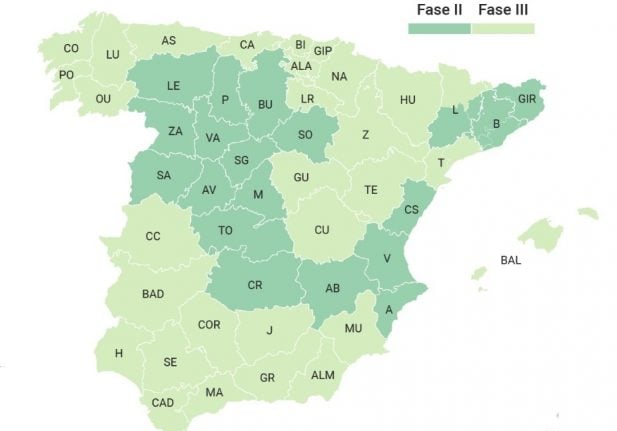 Madrid, Barcelona, Lleida and Castilla y Leon have been given the green light to advance to Phase 2 on Monday – while much of the rest of Spain and the islands will jump ahead to Phase three.

Those provinces and health zones depicted in dark green in the map below will be in Phase 2 while those in the lighter shade will advance to Phase 3:

All of Valencia and parts of Castile La Mancha will remain in Phase two for at least another week.

Here is a breakdown of the rules for Phase 2: You can do this in private homes or public spaces including restaurant/bar terraces.

However, open-air tourist activities such as going for a hike in a local beauty spot can be with a group of up to 20 people anywhere within the same province.

Last week the Official State Gazette (BOE) published an update explaining that children in zones that have advanced to Phase 2, can go outside as often as they like, without time limits and beyond 1km radius as long as they remain within the same province.

Likewise adults over 14 are not bound by the timetable that was earlier in place and are now allowed out to exercise anytime between 6am and 11pm although the over 70s are given the streets between 10am and 12pm and 7pm and 8pm.

According to the new notice, adults (within Phase 2 zones) are also not restricted to exercising within the limits of their own municipality but can travel anywhere within their own province.

Regional governments also have the authority to shift the time periods by 2 hours to avoid forcing people out in the heat of the day, so check local council and regional government notices.

Those who live in municipalities with fewer than 10,000 inhabitants are also not bound by the same tight restrictions.