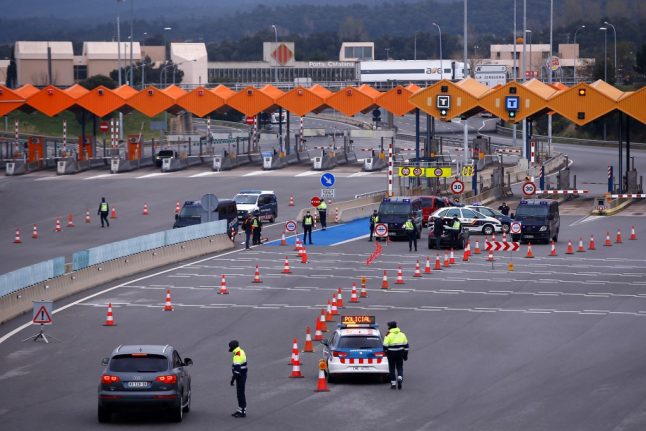 Spain will reopen its land borders with France and Portugal on July 1, the tourism ministry said Thursday, reversing an earlier statement by the minister suggesting it would be earlier.

The clarification was issued after Tourism Minister Reyes Maroto told a foreign press briefing that the restrictions on cross-border movement with France and Portugal would be lifted on June 22nd.

“We are maintaining the date of July 1 for the resumption of international mobility and the reopening of international tourism,” a spokeswoman told AFP after Lisbon expressed surprise and asked for clarification.

In a statement, the ministry said internal mobility within Spain would be permitted once a national state of alert ended on June 21, while the country would reopen its borders to international visitors “from July 1”.

“It is, of course, Portugal which decides on the reopening of the Portuguese border and Portugal wants to do this in a coordinated manner” with Spain, he said.

“Unfortunately, declarations by Spanish government ministers follow one after the other and are not closely coordinated.”

“In the case of France and Portugal, I want to confirm that from June 22nd, the restrictions on mobility will be lifted,”  Maroto had said in a briefing with the foreign press on Thursday morning, adding that in principle the 14-day quarantine requirement “will also be dropped”.

“This is very important because it will allow us to welcome back both French and Portuguese tourists,” the minister noted.

The date coincided with the end of the state of emergency which has just been given a final extension until June 21st.

Spain closed its borders with France and Portugal on March 17, three days after imposing a nationwide lockdown to battle the virus which has infected more than 240,000 people and killed over 27,000.

And Spain had announced in May it would quarantine anyone arriving into the country from Europe from May 15th.

France responded by saying that it would quarantine arrivals from Spain “on the principle of reciprocity” with a French presidential official saying the quarantine measure “did not represent the desire” of France.

However the French quarantine currently in place has a lot of exemptions and is voluntary only.

READ ALSO Who is quarantined on arrival in France?

Spain had already announced it would ditch the quarantine requirement for arrivals in July in order to encourage tourism.

“Right now, given the improvement in the epidemic in Spain, there is a debate under way about whether we could bring forward the date for lifting this quarantine requirement,” Morato said.

“If the conditions are right to lift the requirement before July 1st, we will.”

However, a statement issued by the Spanish government just hours later made clear that the July 1date still stood. This is in line with an announcement made by the Spanish premier in late May.

“I am announcing to you that from the month of July, entry for foreign tourists into Spain will resume in secure conditions,” Sanchez told a press conference.

Reaffirming the importance of tourism to the Spanish economy, Sanchez said the country would again be ready to welcome visitors in the summer.

“As you know, Spain receives more than 80 million visitors a year. I am announcing that from July.

“Foreign tourists can also start planning their holidays in our country,” he said.

Workers with Covid symptoms can now ask for sick leave from their job through the Meva Salut website, app or via the appointment website here, without the need to present a positive antigen or PCR test. The new service has been available since Tuesday, July 5th.

All that is needed is to log on with a CIP number and password or digital certificate and click on ‘altres servis’ (other services), followed by ‘Programar visites d’atenció primària’, where you usually make an appointment.

Those who apply will automatically be given sick leave for the next five days, which will be confirmed via text message or e-mail.

If symptoms persist longer than five days, authorities say you should contact your local health centre to ask for the leave to be extended.

The move was introduced in a bid to take the pressure off local health services who attended 105,024 patients in the last week, 16 percent more than during the previous week.

Around 9.07 percent of people who visited hospitals in the region on Monday July 4th -15,817 patients – had symptoms compatible with Covid-19.

In addition, within the last four weeks, Catalan health services have seen 85 percent more patients with acute respiratory illnesses, thought to be a result of Covid-19 infections.

“The measure aims to free up resources for people who really them,” explained Craywinckel.

“It’s a way of simplifying administrative procedures. We already know what the symptoms are, so there is no need for the patient to explain to us face-to-face or over the phone,” she continued.

The number of Covid-19 infections in Catalonia has risen by 15 percent in the last week, with 2,032 hospital admissions, the highest number since mid-February 2022.

There have also been 51 Covid-19 patients admitted to Catalan ICUs in the last week.

READ MORE: What are the specific mask rules for public transport and travel in Spain?

This is not the first time the Catalan health authorities have introduced an automatic sick leave system for those with Covid-19.

A similar service was introduced earlier this year during the height of the sixth wave, with a seven-day leave period plus the need to present a positive Covid-19 test.

Andalusia also introduced a similar automatic sick leave system for those with Covid-19 and a positive test back in February 2022.