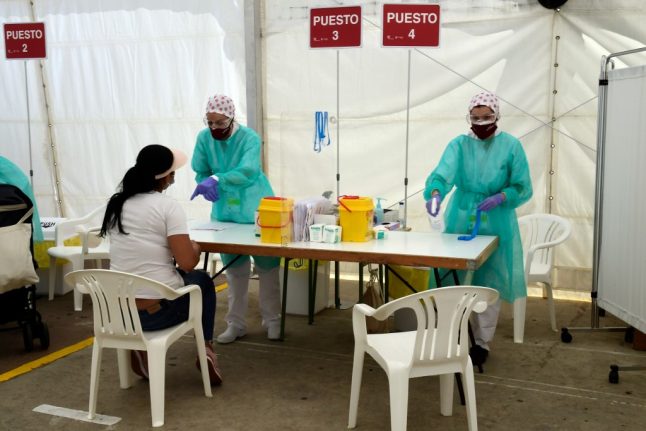 Nurses prepare to take blood samples at a temporary testing point in Torrejon de Ardoz, on May 29, 2020. JAVIER SORIANO / AFP

Thousands of residents of the town of 130,000 queued to have a blood sample taken and take advantage of a free test offered by the town hall in a bid to log who has “been in contact with the virus” and track its local spread, a statement by the municipality read.

“If you do the test today and you are positive we shall call you the next day so you can come and do a PCR (polymerase chain reaction) test” to see in what contagion phase you are (and) meanwhile take adequate isolation measures,” project coordinator Pepa Soriano told AFPTV.

“Torrejon has been one of the communes most affected during the pandemic,” she explained. People leave after having a blood test done at a temporary testing point in Torrejon de Ardoz, on May 29, 2020, where the city council has started to run around 130,000 free and voluntary tests for COVID-19.  JAVIER SORIANO / AFP

The move to take the tests comes with the government having faced bitter criticism from the opposition — and notably the far right — over its management of the crisis.

A death toll of more than 27,000 — around one-third in and around Madrid — is one of Europe's highest, but far-right party Vox has accused the government response of failing to protect the elderly and vulnerable while reining in civil liberties in what was one of the toughest lockdowns seen in Europe.

Spain's government view — shared by many epidemiologists — is that mass testing of entire towns is indiscriminate and not the best use of resources.

There has also been concern in the media of the danger of stoking “health populism” — whereby local authorities may feel compelled to outdo their neighbours in testing.

But in Torrejon, the mass testing opportunity seemed largely welcomed.

“It seems very good to me… We all ought to do it because we could have had the virus without it developing,” says Adriana Arboleda, a 35-year-old come to take the test with her daughter.

The town hall expects around 80 percent of locals will show up at around 28,000 per day. Nurses take blood samples at a temporary testing point in Torrejon de Ardoz, on May 29, 2020, where the city council has started to run around 130,000 free and voluntary tests for COVID-19. JAVIER SORIANO / AFP

The government is not convinced about the initiative, however.

“You can't just go it alone on this matter,” the health ministry said on Thursday, estimating there should be a national diagnostic strategy as “it would be very counter-productive to race to see which municipality does the most or goes the quickest.”

Late last month the health ministry launched a national sero-epidemiological survey whose partial results showed only five percent of the population to be infected with new coronavirus, rising to 11.3 percent in the Madrid region.

Madrid's conservative regional government has accused the Socialist national government of taking “political” rather than health-based decisions in ensuring Madrid, along with similarly affected Barcelona, began exiting lockdown later than other regions.