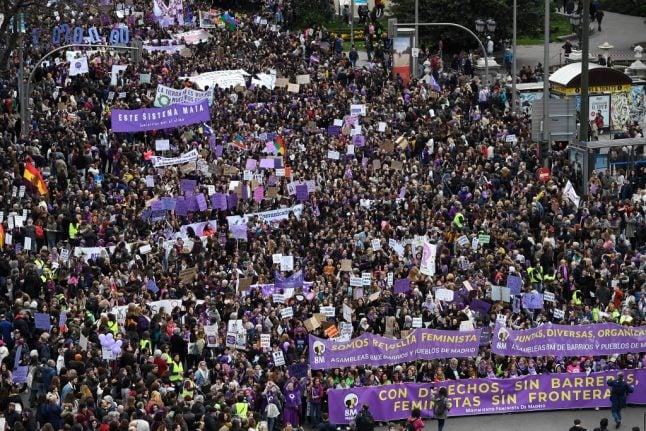 Spain has suffered one of the most-deadly outbreaks of the virus that has so far killed more than 27,000 people, with the battle to contain the epidemic becoming increasingly politicised.

As the country began a 10-day mourning period to grieve the victims, a storm of controversy blew up around Interior Minister Fernando Grande-Marlaska for sacking a top Madrid police chief who oversaw the report, prompting calls for his resignation.

The dispute centres on a case recently opened by an investigating magistrate following a private complaint over the government's handling of the crisis in Madrid, the epicentre of the epidemic.

A key question in the investigation, which is looking into suspicions of possible administrative misconduct, is whether the government should have let the International Women's Day rally go ahead.

The march was attended by 120,000 people including many members of Prime Minister Pedro Sanchez's government, with three ministers later testing positive for the virus. Tens of thousands of people gathered for the march through Madrid. Photo: AFP

As part of the probe, the magistrate commissioned a report from the city's Guardia Civil police, and has summoned Jose Manuel Franco, the government representative in Madrid, to appear on June 5 to explain why he let the march
and other events go ahead.

According to the report, a copy of which was seen by AFP, Franco's department “was aware of the danger involved” in holding such a rally.

At the time, the epidemic was already under way but the scope of it only began to emerge on March 9 when the numbers shot up and Madrid said it was shutting down all the region's schools.

Five days later, the government declared a strict nationwide lockdown to slow the spread of the virus.

'Thousands of lives put at risk'

“We demand you take responsibility for subverting the judicial independence of the investigation into alleged crimes on March 8th when thousands of lives were put at risk,” opposition leader Pablo Casado of the right-wing Popular
Party charged on Wednesday.

The Guardia Civil report also criticised the health ministry's emergencies coordinator Fernando Simón for not advising against the rally, while privately telling an evangelical churches' representative that “under no circumstances” should they hold a congress with international visitors. A woman wears a mask during the march in Madrid. Photo: AFP

But Simón brushed off the criticism, telling reporters on Tuesday the impact of the march was “marginal” on a weekend when the city also hosted a football match, public transport was running normally and the far-right Vox held a rally of 9,000 people after which several of its leaders tested positive.

The increase seen on March 9th “is not attributable to the (previous) weekend” but to cases that would have been transmitted at the end of February, taking into account the incubation period, he said.

The impact of that weekend would have been seen “perhaps 16 or 17 days later, but no specific increase was noted in that period,” he adding: “What we saw was the expected evolution of the curve.”

On Monday, Grande-Marlaska dismissed Diego Perez de los Cobos, head of the Guardia Civil in Madrid who was responsible for the report.

“The executive cannot impose pressure like this,” Jose Cobo of the Spanish Guardia Civil Association told AFP, saying he suspected the minister knew about the report.

Quizzed over the move in parliament on Wednesday, Grande-Marlaska, a former anti-terror judge, rejected the allegations, saying the dismissal was part of a planned reshuffle in the Guardia Civil leadership and denying he had access to the report.

“There has not been any interference with any other power of state and there will never be as long as I am interior minister,” he said.