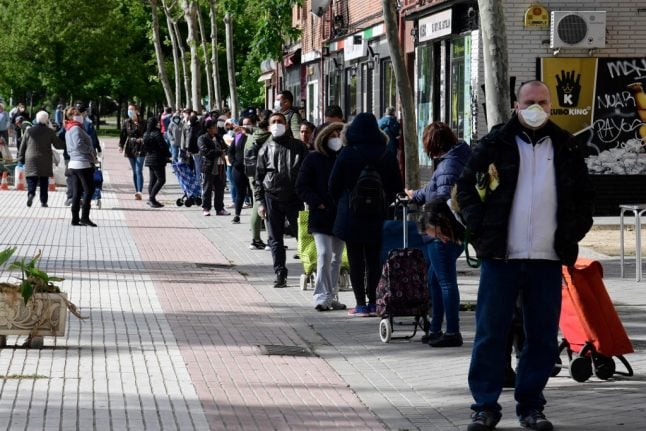 People queue to get food rations in Aluche. Pictures by Javier Soriano

Jacqueline Alvarez, 42, is picking up basic foodstuffs in the working-class neighbourhood of Aluche.

“I cover my face because I feel really ashamed because I've never had to ask (for food) before in my life,” she admits.

Behind her, a queue of nearly 700 people snakes around the buildings, all waiting to receive something to help feed their families from an emergency food bank based in the neighbourhood association.

And such images are popping up increasingly across Spain where food aid handouts have leapt by 40 percent during the lockdown, the Spanish Association of Food Banks (FESBAL) says. People queue to get a free food ration from the Aluche Neighborhood Association (AVA)'s food bank in Madrid.

For many people, it is the first time they've had to seek help, like Alvarez who has three children and says neither she nor her husband have had any money coming in for the past two months.

“My husband is a waiter and he has been furloughed but we still haven't received anything,” says Alvarez, who is of Honduran origin.

“I work as a domestic help but my employers haven't declared me,” — meaning she can't claim benefits.

The problem is global, with Oxfam saying the economic crisis caused by the pandemic could push 500 million people into poverty.

In Spain, the lockdown has hammered an economy with one of the highest rates of unemployment in the eurozone, second only to Greece.

“This situation has impacted, first and foremost, people who were already vulnerable before the pandemic,” acknowledged Spain's Socialist Prime Minister Pedro Sanchez, “those who had not managed to recover from the effects of the crisis in 2008.”

As the economic crisis took hold, unemployment soared past 26 percent in 2013 before dropping to around 14 percent last year. This year, it is expected to hit 19 percent.

Although the current situation has not yet chalked up the same numbers, the impact has actually been worse. “The crisis we're facing now has been exponentially much worse than in 2008… we have never mobilised as many resources as this in our history,” says Olga Diaz, deputy head of social assistance at the Spanish Red Cross.

So far, the organisation has helped more than 1.5 million people since the start of the lockdown in mid-March, “about 68 percent of whom have never come before”, she says.

Unlike in 2008, this situation has “also paralysed the informal economy” which many people relied on to survive the previous crisis, says FESBAL spokesman Angel Franco.

Even before the epidemic took hold, despite the economic recovery, Spain's poverty rate was “shockingly high” with its poorest living in some of the worst conditions in Europe, said UN poverty expert Philip Alston in February.

“It's incredible… sometimes they're queueing up to give us food,” smiles Esperanza Vivas, a volunteer at Aluche's neighbourhood association.

The Red Cross says it has seen the number of volunteers doubling.

And in some places, offers of help have outstripped demand.

“People are calling from all over the place saying they've got this or that (to donate), and volunteers too, we have more people who want to work with us than we have space for here,” says Miguel Querijo of the Order of Malta Catholic charity.

At its soup kitchen in the working-class neighbourhood of Tetuan, volunteers who have been helping since the crisis of 2008 work alongside other more recent arrivals like Elena Lizaur.

“We lawyers have little work right now so I've used this time to come here,” says the 61-year-old Madrid resident.

But the charities cannot tackle the problem alone. People queue to get a free food ration from the Aluche Neighborhood Association (AVA)'s food bank in Madrid.

“For this reason, one of the government's first commitments is to activate as soon as possible a basic income scheme.”

The scheme, which will be launched next month, is expected to help out close to 850,000 struggling households that are facing “severe poverty”.

Until then, Jacqueline Alvarez and her family will just have to do what they can.

“I live day-to-day, I don't think about the virus,” she told AFP.