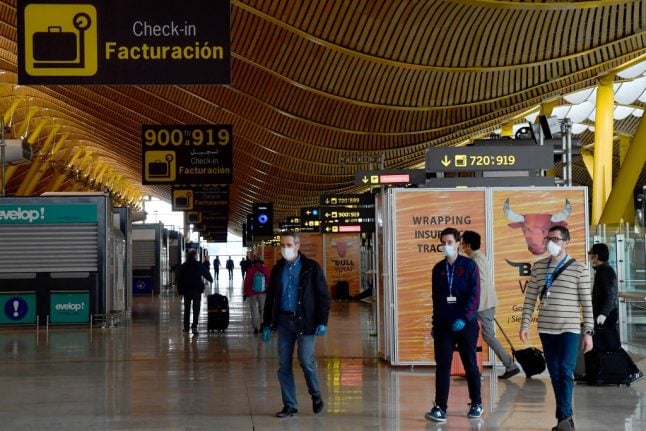 Here’s a breakdown of everything we know so far about the new measures and the rules on travelling into Spain during the coronavirus crisis.

From Friday May 15 until end of the state of emergency

The new measures were published in Spain’s Official State Gazette (BOE) on Tuesday morning and stated that from Friday May 15 travellers arriving in Spain will be expected to undergo a quarantine period of 14 days.

The order will be in place as long as the state of emergency lasts.

A state of emergency was first declared on March 14th in Spain, allowing the government to roll out confinement measures for its nearly 47 million citizens.

Since then it has been extended four times, with the approval of Spain’s parliament and is currently due to run out on May 23, although Spain’s government have suggested they want to extend the powers to cover Spain’s plan to transition to a new normal which could see it in place until at least the middle of June.

What exactly do they mean by quarantine? Anyone coming into Spain either by land border or through an airport or sea port will be told to self- isolate, that is stay at home without coming into contact with other people, for a period of 14 days.

However, the restrictions are much the same as those imposed on everyone in Spain during the lockdown (that is before Spain moved to the preparatory Phase 0 stage of the government calls the “plan to transition to a new normal”).

That is, those quarantined will still be allowed to leave the house in order to buy essential things such as food from the supermarket or medicine from the pharmacy or to seek medical assistance with the condition that a face-mask is worn outside the home at all times.

They won’t be allowed outside to take exercise even if they live in a Phase 0 province or to enjoy any of the activities allowed within a Phase 1 province.

Starting May 15, travelers arriving in #Spain from abroad must remain quarantined for 14 days after arrival:

➡️They will only be able to go out out for basic needs purchases, assistance to health centers or due to force majeure.

➡️Always with a face mask.

Where will people be quarantined?

The BOE stated that new arrivals will have to self-isolate either within their own homes or rented accommodation, although it did not make clear whether accommodation would be provided by the state if the traveller did not have suitable lodgings in which to self-isolate.

There is no suggestion that new arrivals will be isolated in a hotel or other facility such as has been seen in other countries that introduced quarantine.

Yes, exemptions include cross-border workers, long-haul truckers, airplane crews and health professionals on their way to work, as long as they have not been in contact with anyone diagnosed with Covid-19.

It also seems probable that those transiting through Spain – ie those travelling across Spain from Portugal to France, will be allowed to do without the need to quarantine as long as they drive direct across the country and make minimum stops. More on that below.

What checks will be made?

According to the BOE, health authorities may contact individuals in quarantine to check on their health status.

Travel agencies and transportation companies will have to inform customers about quarantine requirements when travel arrangements are made.

And airlines must provide customers with a Passenger Location Card to be filled out and presented to authorities when they enter Spain.

Meanwhile anyone who develops symptoms is instructed to contact their regional health services.

So is Spain open to tourists now, as long as they quarantine? The answer is no. The new announcement does not mean that Spain is opening up its borders to international travellers.

Currently the borders, both land and air, are closed to all except Spanish citizens, those who are legally resident in Spain, cross-border workers or those who can prove “exceptional reason” to enter Spain.

The borders have been closed since March 17th and that order was exented until May 23 with the current deadline for the end of the state of alarm in a notice published on the BOE on May 8th.

Does it apply to those who want to travel to their holiday home in Spain? Unfortunately, travel to Spain remains limited to those who are Spanish or legally resident in Spain or to those who have reason to enter for work or in exceptional circumstances described as “force majeure”.

In a recent facebook post British Consul in Barcelona, Lloyd Millen confirmed that British Nationals with homes in Spain had been turned away at the border, both land and at the airport, because they didn’t have the proper paperwork to prove residency.

The Local sought clarification from the British Embassy in Madrid as to whether the latest quarantine rules would affect that policy.

A spokesperson said: “At this time the rules around entering Spain are very strict. Only Spanish citizens, those who are legally resident here, frontier workers or those who can prove they need to enter Spain for essential reasons will be allowed to enter the country.

“This applies to airports, ports and land borders. If you want to enter to return to your home here you must have a green residency certificate to prove your residence. Anything else, such as a padron certificate or utility bill, will not be accepted and we would advise you not to try. It is for the Spanish authorities to determine who can enter the country and we cannot guarantee that you will be able to enter Spain.”

Finally they added: “If you are eligible to enter Spain you will need to abide by the 14-day quarantine restrictions announced by the Spanish government, which take effect from Friday.”

What if I want to transit Spain?

One reader who is planning on driving home to the UK from Portugal where they were when the country was locked down asked whether they would be required to quarantine in Spain.

Just as the borders with Spain are open to those transiting the country in order to reach their place of residence, it is understood that quarantine rules will not apply to transit travellers.

The updated travel advice from the the UK Foreign Office on the Portugal page states:

“There are border controls on the land border with Spain. Cross border workers, goods traffic and people entering or leaving Portugal to return to their place of residence will be allowed to travel.

“From 15 May, anyone entering Spain, including Spanish nationals and residents, will be required to self-isolate in their residence or a hotel for a period of 14 days. Cross-border workers, lorry drivers, healthcare professionals and people transiting Spain to return to their normal place of residence will be exempt from this measure.”

However, it advises those travelling through Spain to providence evidence of onward travel (ie ferry booking) as well as a letter in English, Spanish and French to help explain their journey to border authorities. That documentation can be downloaded HERE.

The French government have also implemented measures for entering and transiting through France, including the requirement to carry documentation justifying your travel. Check the latest travel advice for France ahead of your journey.

For FCO updates on travel in Spain click here.

Why haven’t they done it already?

The only imposed quarantine on new arrivals has been those Spanish citizens who were formally repatriated by the state from hotspots including Wuhan and Italy. But with the whole of Spain on strict lockdown since March 14, anyone who arrived in the country after that date was effectively quarantined along with everyone else in the country.

The reason that it is being introduced now is because restrictions have been lifted to allow people to exercise outside, visit small businesses and for those who live within Phase 1 provinces, meetings between friends and families from different households is now permitted.

How does it compare to rules in other parts of Europe?

The BOE order notes that several members of the Schengen area (22 European Union members plus Iceland, Liechtenstein, Norway and Switzerland). already have restrictions in place at their air and maritime borders, including Germany and Belgium.

France has proposed a mandatory two-week quarantine – although on Sunday the presidency made it clear it would not apply to anyone coming into the country from the UK, the EU or Schengen area.