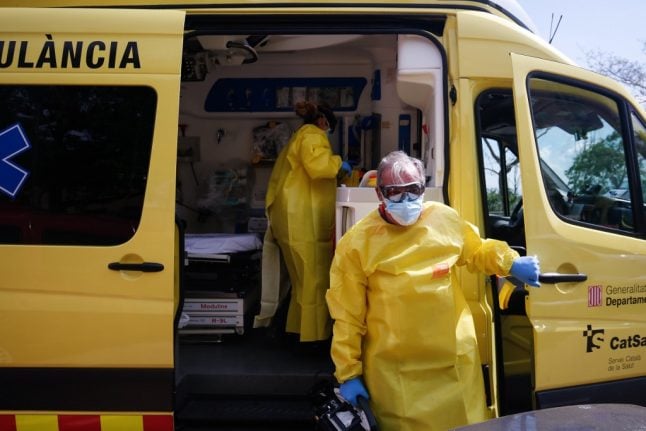 Although the pandemic has weakened its deadly grip on Spain, there has been no let-up in the “constant tension” faced by ambulance crews who know the coronavirus could be lurking anywhere.

Rodriguez and his team were at the ambulance station at Parc Tauli hospital in Sabadell, north of Barcelona, when a call came in that a 65-year-old woman had collapsed at home.

Although no virus cases had been reported at the address, they took no chances. “You can't be sure, because these days anyone could be infected,” said Rodriguez, a stocky 47-year-old with an earring who works for the SEM, the emergency services in the northeastern Catalonia region.

“You have to protect yourself, not touch anything and always keep yourself clean, and that creates constant tension.”

When the ambulance stops, doctor Pere Lanau and nurse Monica Naval jump out in yellow coats, putting on gloves, two masks and goggles before going in through a slightly open door where a woman can be heard sobbing.

“We're used to going straight in but now we have to take the time to protect ourselves,” says Rodriguez.

“It makes you feel bad because you know you have to get in there quickly because time is vital.”

A wide corridor leads to the sitting room where a woman's lifeless body lies on the floor. The victim, who suffered from many pre-existing medical conditions, had felt ill for days but nobody called the doctor until she collapsed.

“With all this virus going around, we thought it best to wait,” stammers the daughter, whose little girl is playing with her dolls in a nearby room.

“People are afraid, really afraid of hospitals and it hastens the end,” explains Naval, the 41-year-old nurse.

“Very few people come in but those that do are in serious or… very serious condition,” she says after returning to the ambulance station, carefully disposing of the protective gear that they took off and put into sealed bags after leaving the house.

Non-disposable items such as goggles are disinfected along with the inside of the ambulance and all the medical supplies. 'Sometimes we break down'

These medics have seen the gradual weakening of the outbreak in Spain — one of the worst-hit countries in terms of deaths, but where the daily toll has fallen from 950 at its height to under 200 earlier this week.

For the area's ambulance service, work is about 20 to 30 percent down on what it was at the height of the crisis, and now they might not see a single patient with COVID-19 during a 10-hour shift.

“It seemed to be improving over the last few days. At the moment (new) COVID cases are pretty exceptional,” explains Pere Lanau, now wearing shades instead of protective goggles, saying the virus cases they do see are patients who are being moved between hospitals. Now 60, with greying hair and the voice of a radio announcer, the experienced doctor says he has never seen a situation so complicated.

“Above all because of the nature of the sickness, so infectious, and the need for personal protection kits. These are things we don't normally wear and it has taken us time to get used to it,” he explains.

The first weeks were frenetic as panic spread through the population, with anyone showing the slightest symptom sure that they had caught the virus, says Antonio Carballo, who heads the SEM emergency services in the area. As the workload ramped up, so did stress levels. Although they were not short of personal protective equipment, the medics themselves were afraid of getting infected while dealing with complex emotional situations.

“What is very difficult is leaving a family when you take the patient away. Many of them weep,” said Rodriguez.

“In some cases, you know that depending on how things pan out, it could be the last time they see the person. And that's hard,” says Lanau.

Given the situation, the SEM has increased psychological help for emergency staff.

“The tension is constant and it ends up undermining our professionals,” says Carballo.

“It's true that this is our job and we're ready for it and we like doing it, but at times we break down, like any human being.”