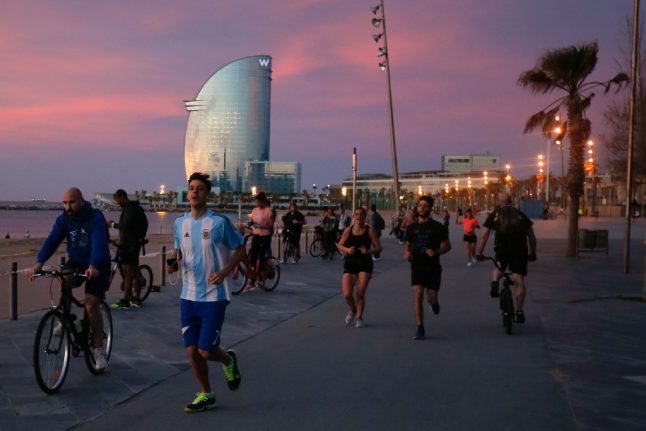 People across Spain were on Saturday free to go for walks and play sport after 48 days of home confinement to combat the coronavirus in one of the worst-hit countries.

Spain's nearly 47 million people have since March 14 lived under one of the strictest virus lockdowns in the world, with adults authorised to leave home only to buy food, medicine or walk the dog. “It's lovely to be able to dress up and go for a walk instead of doing exercises at home,” said 79-year-old Sonia Claesson, out for a stroll near the Madrid opera with a friend, 76.

“We're part of the high-risk population, so I didn't go out at all,” she said. 'Out for first time'

The lockdown was prolonged late last month until May 9 but Prime Minister Pedro Sanchez on Tuesday unveiled a plan to gradually begin easing the restrictions in four phases that should be completed by the end of June.

Children under 14 were already last week allowed to step outside for walks. And the restrictions were further eased on Saturday. “I am going out for the first time for a short walk,” said 87-year-old Amalia Garcia Manso as she wandered down Madrid's Calle Mayor, wearing a facemask and gloves and supported by a cane and the arm of her daughter.

“This hurts, it's hard for me to see that all of Madrid is closed”, she said, on one of the city's main shopping streets.

Some people stopped for a selfie at the Alcala Gate in the centre of the capital, adorned with a black ribbon as a reminder of Spain's losses to Covid-19. In Barcelona, the seafront was crowded with people running or walking although, unlike some seaside resorts like San Sebastian, access to the beaches was still blocked.

Not everybody respected the two-metre distance rule from others, prompting Jose Antonio, a 65-year-old pensioner, to complain that “if people want to catch the virus, let them, but then they'll confine us again in two or three weeks time”.

To limit the risk, wearing masks will become mandatory on public transport in Spain from Monday, Prime Minister Pedro Sanchez said on Saturday. Millions of masks are to be distributed across the country. Their use had, up to now, simply been “highly recommended”.

Despite the easing of the lockdown, many restrictions remained. In towns of more than 5,000 inhabitants, children and the elderly cannot leave home at the same times.

The time slots of 10am to midday and 7pm until 8pm are reserved for people over 70 and those they need to accompany them. From 6am to 10am and from 8pm to 11 pm, adolescents of over 14 and adults can leave to go for walks of less than one kilometre (0.6 miles) from their homes, but only two at a time from the same household.

Near Madrid's central Retiro Park, which remains closed, many residents were out jogging, some in groups.

A policeman used a loudhailer to urge people to jog only on the sidewalks and not on the road.

Marcos Abeytua, a 42-year-old financial advisor who lives in the normally bustling district of Chueca, said he got up at 7am to go for a run, something he would not normally do on a Saturday morning when he usually recovers from a late Friday night out.

“After so many weeks in confinement, I badly wanted to go out, run, see the world,” he said. “Yesterday, I was like a child on Christmas Eve.”

Afternoons are reserved for children under 14, who can leave home accompanied by an adult between midday and 7pm.