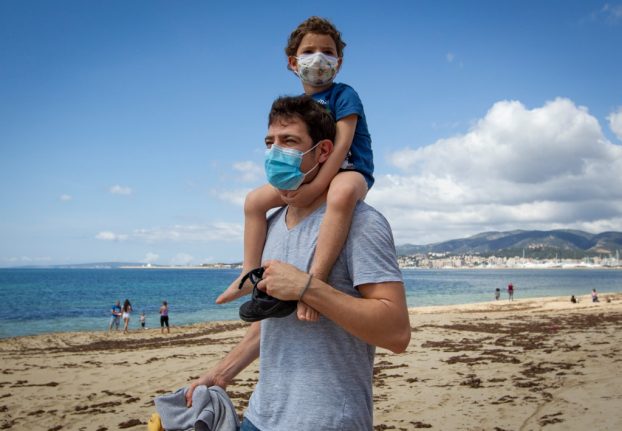 A father and son wearing masks stroll along a beach in Mallorca. Photo: AFP

As the world's second-most visited country, Spain usually moves into high gear in the run-up to Easter, but this year, all bets were off with the coronavirus epidemic dealing a devastating blow to the tourism industry which is now seeking ways to salvage the summer.

“We want to be at the forefront of those destinations offering reassurance to our clients by being the safest and the most hygienic,” said Daniel Barbero, the local official in charge of tourism in Almunecar, a seaside town some 80 kilometres (50 miles) east of Malaga in southern Spain.

Although Spain is the second-most popular tourist destination in the world, it has been badly hit by the epidemic with the number of deaths in the country standing at more than 24,000.

But with the epidemic in Spain peaking earlier this month, the government has laid out plans for a staged transition out of the lockdown, with the gradual opening of bars, hotels and restaurants to begin on May 11th.

And the stakes are high in a country where the tourism sector accounts for 12 percent of gross domestic product and 13 percent of employment, but which looks set to lose up to 60 percent of its annual income as a result of the lockdown, the Exceltur tourism association has warned.

Incensed by the vagueness of the government's plans to roll back the restrictions, industry professionals have made a string of proposals aimed at drawing back the tourists.

And Almuñecar is hoping to pilot some of these proposals, with its highly-popular diving clubs working on detailed plans to avoid infections being passed on through breathing equipment that is rented out to divers.

The town is also hoping to avoid crowding on its beaches with patrols by local police and civil protection officers, Barbero says.

On Spain's eastern coast, the town of Gandia is looking to recruit extra lifeguards to ensure sunbathers remain at least two metres away from each other on the beach.

And it is mulling separate hours when children can go to the beach in order to avoid too much cross-over with older and more vulnerable people.

“We're not thinking about putting up barriers… (because) you can't fence off an open space like a beach. We will keep people informed, and try ensure a sense of personal responsibility,” explains Vicent Mascarell, the town's tourism councillor.

They will also instal hand gel dispensers at beach access points, he says.

READ MORE: Could this be the future of dining in post-coronavirus lockdown Spain? Partitions installed in a restaurant in Madrid. Photo: AFP

Bars and restaurants are also looking to the future although for now, the country's main hostelry association has advised against the installation of perspex partitions as too costly.

“We're going to have to reduce capacity by half. A restaurant with 15 or 20 tables won't be able to have more than eight or 10 with a metre or 1.5 metres (three to five foot) between them,” says Jose Manuel Navarro, president of the town's hostelry association.

To limit the financial impact, the town hall will facilitate the expansion of pavement terraces to allow bars to set out more tables.

Making menus available online will reduce the need to pass around physical menus.

And in a country where sharing food like paella or tapas is very popular, “we will see more individual portions,” says Mascarell.

“It has to be done because we're facing a new reality,” he said.

Hygiene measures will also be stepped up in hotels, in particular in Madrid, the worst-hit region, which is working on a “COVID-free hotel” quality seal.

For visitors arriving at the RoomMate Hotels chain, they will step onto bleach-infused carpeting to ensure their shoes and suitcase wheels are clean and then have their temperature taken before being handed given a mask, gloves and sanitising gel.

And at the VP hotel in Plaza de Espana in the city centre, guests will undergo a quick COVID-19 test before entering.

“If the client tests positive, we will put them in a closed room before informing the health authorities,” the group's director Javier Perez told AFP.

If the guests are negative, they will be able to go up to the rooftop bar and restaurant which has panoramic views over the city with a 50-euro surcharge to cover the cost of the test carried out by a private clinic.

The aim is to reassure the hotel's many guests who tend to be in their 60s and 70s.

“We already have 600 lunch and dinner bookings. The first week we reopen, we'll be completely booked,” says Perez, who says the hotel has invested 120,000 euros in ultra-violet light devices to ensure total disinfection.

“But we don't know if people are coming just to be tested or to eat!”

The big question, however, is when the borders will be opened to international visitors.

For the moment, nothing has been decided at a European level, a government official told AFP.