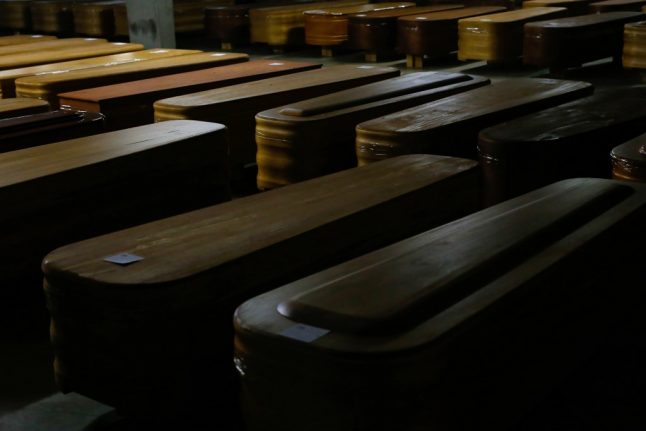 Coffins lined up at the Collserola funeral parlour in Montcada i Reixac, near Barcelona. Photo: AFP

Justice authorities in Castilla-La Mancha first reported the discrepancy. While the official number of mortalities confirmed as a result of covid-19 by health authorities amounted to 965 deaths during March, the number of burial licences issued were more than three times that amount.

Of course, not all deaths can be blamed on coronavirus but when the number of deaths is close to three times that of the same month in the two years previous, even after taking account of the official coronavirus numbers, it starts to look suspicious.

In March 2018, authorities issued 1,826 burial licences and in 2019, 1,691 were issued. But in 2020 at the height of the coronavirus epidemic in Spain, 3,319 licences were issued in March across the region of Castilla-La Mancha. And yet only 965 deaths were officially recognised as coronavirus mortalities.

Similar discrepancies are emerging in regions across Spain.

In a front page exclusive on Wednesday, El Mundo warned that the true number of deaths from coronavirus across Spain could be double the official number.

Madrid which has been the worst hit region where some 3.539 deaths from covid-19 were confirmed during March saw the number of burial licences surge above nine thousand. And yet according to Spain’s National Statistics Office in March 2019 and March 2018 the deaths recorded were 4,125 and 4,311.

Enrique López, the regional head of Madrid’s Justice Ministry said he believed the discrepancy in numbers were because only those who died in hospital or after a diagnosis tests confirming covid-19 appeared on official numbers.

“There are many people who die in their homes or residential care homes who were never tested so they don’t appear on the official list,” he said in an interview with EsRadio. Mortuary workers wearing face masks and gloves carry the coffin of a COVID-19 coronavirus victim at a cemetery in Madrid. Photo: AFP

The number of deaths in Madrid’s elderly care homes during the month of March amounts to an average of around one thousand, confirmed regional government sources quoted in El Diario online newspaper.

But that figure more than tripled last month, and the vast majority were never tested for coronavirus.

The official figure for the number of deaths in Madrid from coronavirus since the outbreak is 5,371 only 110 more than the number of covid-19 deaths recorded in hospitals across the Madrid region, meaning that few other deaths the occur outside of hospitals are being taken into account.

MAP: The provinces of Spain most affected by coronavirus outbreak

Coronavirus has swept through elderly residential care homes in the capital with reports of dozens dying in one centre and staff admitting that they didn’t have the resources to care for them or seek emergency medical help.

Without widespread testing that has yet to be introduced many of Spain's most vulnerable are dying of conditions cosnistent with coronavirus but are never diagnosed with it, and therefore do not appear within official numbers.

Spain's Ministry of Justice acknowledged the problem and said it had waarned regional civil registries where death certificates are issued to ensure they recorded where deaths took place – either in hospital, at home, or in residential care.

“This is the only way to offer true, verified and as objective information as possible, which will also allow health authorities to focus on places where death rates have increased,” said Sofía Puente, the general director of Legal Security.

So far in Spain, the official death toll from the coronavirus is reported to be 13,798 (as of April 7th) but unfortunately, the true number is likely to be much higher.