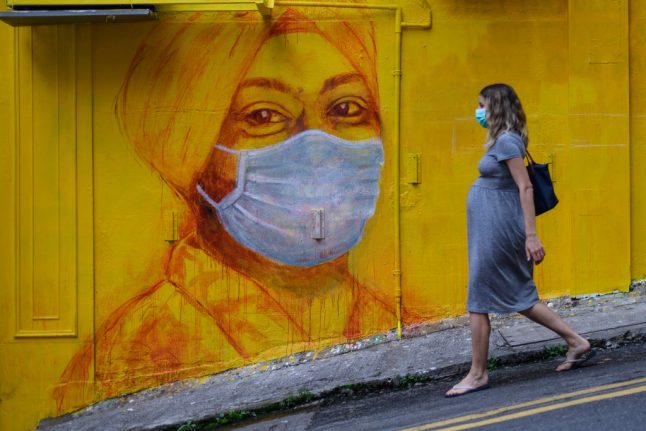 A pregnant woman wearing a face mask as a precautionary measure walks past a street mural in Hong Kong, Photo: AFP

With all but food shops shuttered for the past three weeks as Spain seeks to curb the spread of the virus that has claimed over 13,000 lives, this 36-year-old says she has no choice or they'll have no money.

But what really freaks her out is the thought of going for her 20-week scan at a hospital overwhelmed with coronavirus cases.

“They said the 20-week scan is very, very important and it's my first pregnancy, but I don't want to put myself at risk,” she told AFP.

“What if I go with my husband and the police stop us? Not only are you taking up the time of a policeman who should be dealing with the outbreak, but you don't know whether he himself is infected,” she said.

In Spain, police are quick to fine anyone violating the terms of the lockdown under which people can only leave home for food, medicine or a medical emergency.

For expectant mothers across the world, the deadly pandemic has caused a huge spike in stress and anxiety, compounded by a multi-national lockdown that has played havoc with birth plans and raised countless questions few can answer.

“It shouldn't be be scary to go and have a scan done, it should be exciting,” says Sophie Hales, a first-time mum who just had her 20-week scan at a hospital in Luton near London.

Even though British hospitals are not yet under the same pressure as those in Spain, the atmosphere at the ultrasound clinic was tense, the experience “daunting”.

“Going on your own, especially to a place where you don't know if you're in a room with people that could be carriers of this virus and knowing full well you've got a little baby growing inside you — it's very, very unnerving,” said Hales, 25.

“For me, it would be very terrifying if I was to be confirmed positive because you want to be as strong, as healthy as you can when you're carrying a child.”

For Vanesa Muro it was a nightmare that came true just days before she was to give birth at a hospital in Madrid, Spain's worst-hit region where more than 5,000 have now died and hospitals are on the brink of collapse.

“It was really frightening thinking about whether I could have it passed on to my baby,” she said, describing how her husband rushed her to A&E but was not allowed to stay.

“They wanted the baby out as quickly as possible to see if he'd been infected so they decided to do it then and there,” she said.

Operated on by medics cocooned in protective suits, she gave birth alone to a healthy boy, with tests showing he was virus-free.

The World Health Organisation says there's no scientific evidence showing pregnant women face a higher risk of infection than others.

But is also says it is unknown whether a mother can pass COVID-19 to her baby, although so far they've found no trace of the virus in amniotic fluid or breast milk.

For these women, fear is a big factor, says midwife Maria Jesus Garcia Diaz, who works at a clinic in the Spanish capital.

“One of the most stressful things is uncertainty.. and uncertainty is difficult to alleviate.”

For some, uncertainty about the new social distancing rules is particularly acute, with Lumière Nabab, a 29-year-old estate agent from Paris, worrying about going through labour alone.

“It's stressful, we don't understand much, it's all very vague,” she said.    “One minute they say the father can be with you, the next they say he must be in the next room during the delivery.. In some hospitals, the fathers aren't allowed in at all,” she said.

“The first time you go into labour, it's the unknown — you need reassurance and not to be left all on your own.”

For Maria Rosa Marti, a 29-year-old radiologist from Barcelona who is expecting her second child this week, there are other concerns.

With colleagues on the frontline, she is very aware of the huge pressure on intensive care units, which have been stretched to breaking point.

“What worries most is if there is any complication when I'm in labour and they can't take me into intensive care,” she told AFP.

“For me, a delivery with complications is the worst thing that could happen.”

With pre-natal classes cancelled, birth-plans ripped up and most checkups now handled by phone, it is the midwives who must help these women through this time of unprecedented upheaval.

“We're seeing a lot of decisions taken as a result of fear and that's not good,” says midwife Garcia Diaz, explaining it was crucial to maintain perspective.

“It is true that people are dying and sick.. but we can't deal with everything,” she said.

“Have a look at your situation and focus on what's around you.

“What's important is to look after yourself and not to worry. And only watch a little bit of news.”