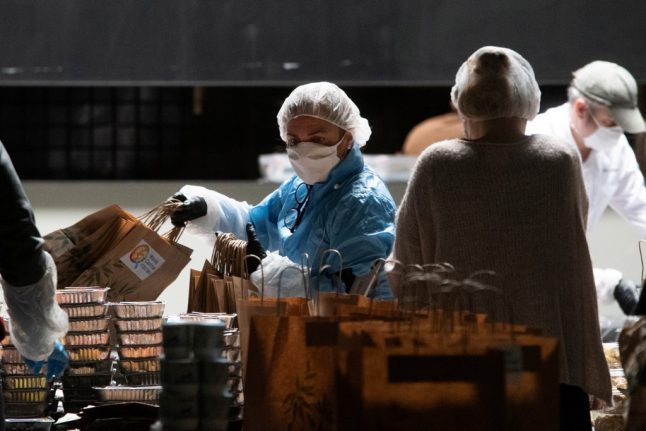 Fierro restaurant workers prepare bags of meals that were cooked for the World Central Kitchen to be distributed for the homeless in Valencia. Photo: AFP

While no amount for the handout has been unveiled, officials have said the measure will only apply to part of the population in a country which saw a record 302,265 people file for jobless claims last month.

“There is a huge consensus” within the government “to put in place this measure,” Consumer Protection Minister Alberto Garzon said during an interview with Spanish public radio.

In a separate interview on Sunday night with private television La Sexta, Economy Minister Nadia Calvino said the government was working to roll out a universal basic income in the nation of around 47 million people “as soon as possible”.

The goal is for this measure to “stay forever, that it become a structural instrument, a permanent instrument,” she said, adding the income would focus on struggling families.

Top-selling daily newspaper El Pais, citing unnamed government sources, said the plan was to introduce a monthly basic income payment of 440 euros ($475 dollars) in a country where the minimum wage stands at 950 euros a month.

The coalition deal reached late last year between Prime Minister Pedro Sanchez's Socialists and hard left party Podemos called for the creation of a universal basic income but did not set a timeframe for the adoption of the measure.

Podemos leader Pablo Iglesias, who is also deputy prime minister responsible for social rights, said the measure was already needed before the coronavirus pandemic given that 30 percent of children in Spain are at risk of poverty.

“With this crisis, the risks for many people multiply…there are people who lost their jobs, who struggle to pay their rent,” he added.

Spain, which has the world's second-highest coronavirus death toll after Italy, ordered a nationwide lockdown on March 14 to try to curb the spread of the virus.

It tightened the lockdown further on March 29th by banning all non-essential work for two weeks.

Last week the government banned rental evictions and barred utilities from cutting off power and water over unpaid bills as part of a package of measures to help people cope with the economic consequences of the crisis triggered by COVID-19.