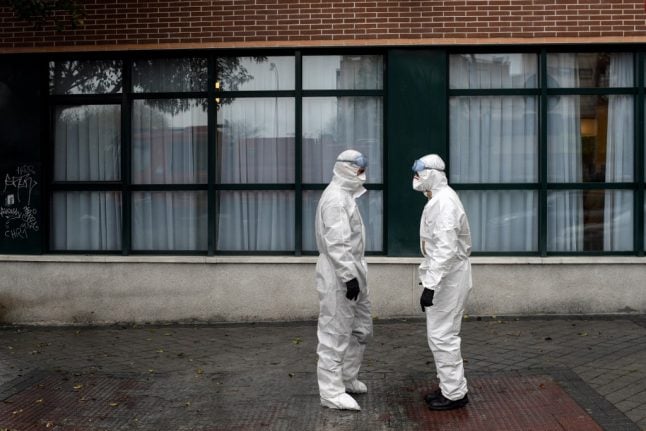 Members of the Military Emergencies Unit (UME) arrive to carry out a general disinfection at the Amavir residence for the elderly in Madrid.Photo: AFP

Criticism of the UK government over its handling of the coronavirus crisis has recently reached new heights. Even the right-wing press, including ‘The Telegraph’, has criticised Boris Johnson’s government for its repeated failure to answer fundamental questions about Covid-19.

At rather pointless daily press “briefings”, the same questions were asked repeatedly to no avail. Many questions naturally revolved around the scandalous lack of coronavirus tests, personal protective equipment and ventilators.

These issues are neither new nor unique to the UK, and many other countries – including Spain – have fallen foul of their critics. However, other countries have reached much higher infection and death toll rates before reaching this catastrophic level of failure. Furthermore, the UK government clearly cannot explain itself to the media, or anyone else for that matter.

After days of empty promises to do more, order more, deliver more, the NHS and the British public will almost certainly be forced to wait far too long for lifesaving supplies.

Ventilators – or lack of them – remain a hot topic. The UK government estimates that 30,000 ventilators will eventually be required: however, the NHS only has 8,000. On Tuesday, Michael Gove claimed that the “first of thousands” of ventilators would be sent to the frontline next week. Within 24 hours, we heard that only 30 would be delivered, with the rest expected “in the coming weeks”.

We’ve heard tell – from the UK, Spain and Italy – of doctors making heartbreaking decisions regarding which patients can live or die. Rumours abound of arbitrary age limits being set on qualification for that last available ventilator.

Meanwhile, doctors – none of whom would ever want to be faced with this terrible dilemma – insist that age alone would not be the deciding factor. Rather, a healthy pensioner would be given precedence over a younger person with pre-existing, life-limiting health issues. That’s undoubtedly true but, speaking as a fit and healthy 66-year old, I don’t think I’ll be high on any priority list.

Those of us of a certain age are naturally worried about our vulnerability to the virus. Many of us, regardless of age, are equally concerned about elderly relatives in Britain.

On Wednesday, a GP surgery in Wales was forced to apologise after sending patients with serious illnesses a “do not resuscitate” (DNR) form to complete. The letter accompanying this form claimed that DNR would provide several benefits, including that “scarce ambulance resources can be targeted to the young and fit who have a greater chance”.

In a further worrying development, UK care homes are also revisiting the DNR debate. Some homes have tried to apply non-resuscitation orders to residents’ records, without first discussing the issue with the individuals concerned, or their families. Worried about a possible blanket application of this DNR policy, the UK healthcare regulator has issued a warning for the practice to stop forthwith.

There’s no doubt that medical professionals, who are putting their own lives at enormous risk, will be forced to make heartbreaking decisions. The sheer scale of this deadly disease is overwhelming world-wide healthcare systems and has strained even the best-prepared of governments. How governments respond to the crisis will tell us a lot about the fortitude and humanity of those we put in power.

On Thursday evening, Health Secretary, Matt Hancock, reappeared at the daily briefing following his own, short, period of self-isolation. He was expected to answer mounting criticism and provide the media and public with some answers. His “detailed plan” was rather lacking in detail, though he did announce a goal of 100,000 tests per day by the end of April. With the exponential increases in UK cases and deaths, four weeks seems like a lifetime to wait, especially for the hundreds of thousands of NHS staff yet to be tested.

We’re trying our hardest to believe that, despite outward appearances, those running the country do care for the health of the British public and are doing everything in their power to rectify earlier mistakes. The time for excuses and waffle is over. We can conduct the autopsy later. For now, it’s time for honesty, transparency, straight-talking and detailed plans.

We’re fed up with ministers throwing big numbers at us and making vague promises about future actions. The media are rightly asking the government tough questions. It’s high time they got some real answers.