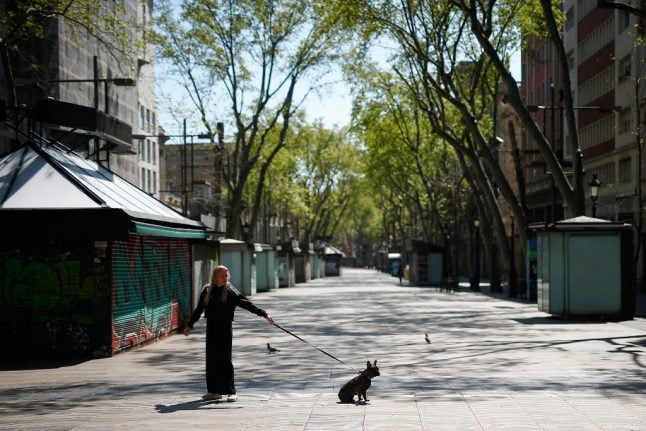 A man came to our house this week and – at a distance – took delivery of a child's snorkelling mask.

It was for a collection for the local hospital where they are being used to help people breath and, you hope, to survive. This kind of thing is happening across Spain.

Almost three weeks into the lockdown, there is sense here that this is how life is going to be for the foreseeable future.

The government has hinted that the state of emergency will be extended until the end of April at least and this is likely to be confirmed in the next few days.

After a miserable few days of cold and rain which has meant we were locked indoors, Spring has finally arrived. The good weather might be the biggest test of Spaniards' ability to abide by the strict restrictions.

I read a survey which said most of Spain's 47 million inhabitants live in flats measuring 60m2. Stuck inside may prove tough.

Things have been difficult enough this week as Spain reached the grim milestone of 10,000 deaths from the virus.

A glance backwards and it was only on 31st January, that the country reported its first death. Two months later and here we are. Hard to take in.

This has been a baptism of fire, to say the least, for the new left-wing coalition government, which has come in for huge criticism for allegedly ignoring a report in March from the European Centre for Control of Diseases, which advised against allowing large gatherings of people.

Instead, Pedro Sánchez, the Spanish prime minister, permitted thousands to join a march for International Women's Day, football matches and political rallies. That was 6th March and just over a week later, the lockdown started.

The initial political unity which existed when the epidemic first hit has now quickly evaporated.

Pablo Casado, the leader of the conservative People's Party, accused Sánchez of “dealing with this crisis with a cocktail of arrogance, incompetence and lies”.

Quim Torra, the separatist Catalan regional president, weighed in by asking the Spanish army to dismantle a camp it had set up – only to reverse this decision and call for the soldiers' help.

Sánchez is to reach out to political leaders this weekend to try to re-establish some unity.

Away from this politicking, one thing that seems certain is as in other countries, Spain's government is struggling to get enough people tested or provide enough beds to treat the ill.

However, another thing which is also clear is that the daily death toll may not be the real picture.

An epidemiologist told me that many of the people who have died are elderly and probably had existing health problems.

This means they did not necessarily die because of the virus but they also had the virus at the time they passed away. It has meant that the figures are much higher.

The expert also said Spain cannot lower its guard and relax the restrictions until there is a substantial decrease in new cases.

Sadly, this seems far away.