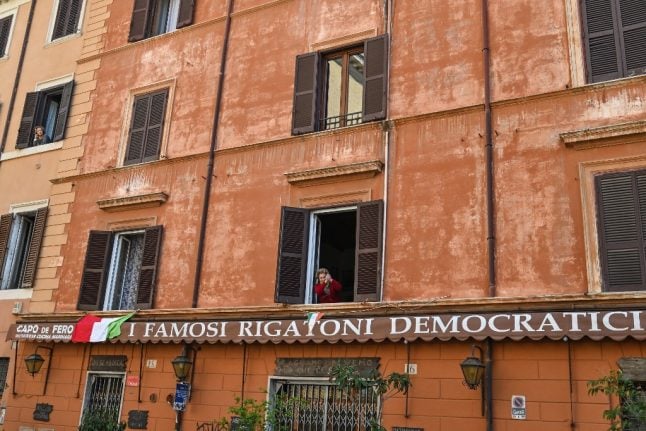 A woman waves from the window of her flat in the district of Trastevere in Rome on March 20, 2020 . AFP

Basing their modelling on the numbers of recorded deaths from COVID-19, researchers from Imperial College London said most countries it looked at had likely dramatically reduced the rate at which the virus spreads.

Using the experiences of countries with the most advanced epidemics like Italy and Spain, the study compared actual fatality rates with an estimate of what would have happened with no measures such as school closures, event  cancellations and lockdowns.

“With current interventions remaining in place to at least the end of March, we estimate that interventions across all 11 countries will have averted 59,000 deaths up to 31 March,” said the report, which was released Monday.

“Many more deaths will be averted through ensuring that interventions remain in place until transmission drops to low levels.” Billions of people around the world have been ordered to stay home to prevent the spread of the novel coronavirus, which has killed more than 38,000 people since it emerged in China late last year.

The Imperial College study said despite the grave strain on the medical system in Italy, lockdown measures had “averted a health care catastrophe”, estimating that the containment efforts had saved 38,000 lives.

For Sweden, which has been somewhat of an outlier in Europe so far for avoiding any strict lockdown on the public, the number given was 82.

Epidemiologists from Imperial College are part of the group advising the British government on its outbreak response.

The study, which used assumptions about the proportion of infected people not recorded in official figures, estimated that some 5.9 million people could have been infected in Italy up to March 28 — almost 10 percent of the population. In Spain, researchers noted a recent “large increase” in deaths and estimated that some seven million people — or 15 percent  of the population — have been infected.

It said it was too early to say whether countries with lower death tolls would see a comparable impact of their intervention measures as those battling a more severe epidemic.

“We cannot say for certain that the current measures have controlled the epidemic in Europe; however, if current trends continue, there is reason for optimism,” it added.