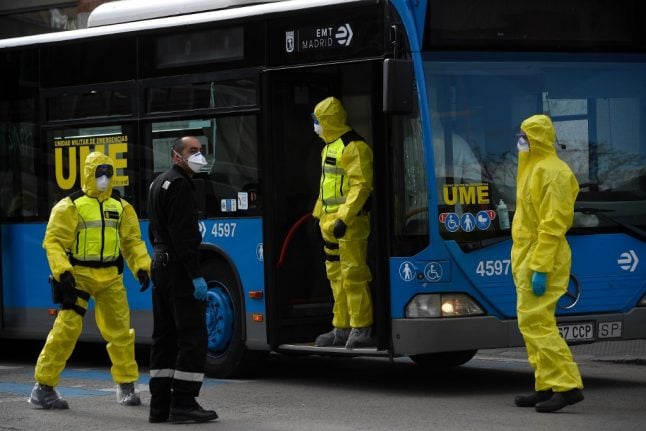 With Spain’s death toll surpassing China’s, and our host country reporting the second most deaths world-wide, it has drawn a lot of media attention, both nationally and internationally.

As in the UK, coronavirus has revealed underlying issues in the Spanish health and social care systems, caused by a decade of austerity.

The disparity between global death and infection ratios highlights the underspending on vital health and social care services in many countries, not least Spain and the UK.

The numbers of doctors, nurses and intensive care beds per capita might go some way to explaining why Germany’s death rate is only 0.4 percent while Italy stands at around 10 percent, Spain 7 percent and the UK 5 percent.

Whilst spending on essential services is not the sole factor – it’s believed that the Italian and Spanish lifestyle of multi-generational living also contributes, as does the ageing population of Italy – it’s certainly a significantly important one.

Add to that the fact that Germany is ramping up testing to 500,000 per week, and you start to understand the disparities.

Spain has been criticised for failing to lock down Madrid sooner and for allowing the Women’s Day mass gathering to proceed – this was attended by an estimated 350,000 to 370,000 people.

Schools in Madrid closed a week before the national ‘state of alert’ was announced, perhaps causing many Madrileños to start packing their bags.

On March 13th, when the quarantine measures were announced, the Madrileños started deserting their capital on mass, congesting motorways as they headed for second homes.

The no-travel rule was not enforced for a further 24 hours. With most Covid-19 cases concentrated in Madrid, this was undoubtedly a major source of spreading the virus around the country.

It was also a mistake previously made in Italy, when the lockdown of its “red zone” was leaked in the press a day beforehand, leading to an exodus of infected people.

Despite making avoidable mistakes, when Spain did lock down, it did so decisively and without any Boris Johnson-style half measures. The rules are strict, correctly enforced and with severe penalties for those who think they know better.

When the UK finally announced its social distancing measures on Sunday 29th, the British media called them “draconian”.

Yet they fall short of recommendations coming both from other countries and the World Health Organisation.

With lots of “shoulds” on board, Johnson told the British public it’s important to stay home, while cabinet ministers constantly undermined his ‘advice’.

Many people still went out to work – whether through financial necessity, a failure to take the crisis seriously, or because unscrupulous employers insisted their roles were “essential”.

Meanwhile, we have well-meaning social media commentators extolling the mental and physical health benefits of daily exercise, as the UK government tell citizens they can exercise once a day. How they intend to police that policy remains to be seen.

So, while we here in Spain are restricted to no outdoor exercise apart from a short walk with your (not somebody else’s!) dog, Brits are off for a long walk or jog, or off to their allotment to dig for victory! I’m with Spain here. Much as I miss my occasional stroll and twice-weekly gym sessions, the risks to my physical and mental wellbeing are outweighed by the risks of far more serious health issues.

Although some statisticians say that Spain’s infection peak might be reached soon, some find the daily death rate difficult to process. Our dedicated health staff, who we thank at 8pm daily with our applause, are having to decide who lives and who dies in overwhelmed hospitals, especially in Madrid.

The scale of the tragedy facing Spain, the UK – and now the US – is immense. We can only hope that the lockdown really is starting to slow the spread and is about to flatten the curve.

Of course, actions taken by the Spanish government must be scrutinised, and lessons must be learnt.

Other countries also need to examine their actions and must be open about any mistakes made. There is a place for criticism and a need to ask questions, but this cannot be a time for political point scoring.

Rather we must learn from our experiences, our mistakes, and make sure they are not repeated here, or anywhere else.

The pandemic is at different stages in different countries. Spain is roughly a week behind Italy and will likely catch up soon, as will the UK. It’s vital we learn lessons from countries such as South Korea, which implemented an extensive testing programme and is a leading international light in containing this dreadful virus.

Clearly there are lessons to be learned from the German approach too. The international community must work together, and in the open, to avoid a repeat of past mistakes.

Our hearts go out to all those grieving for lost loved ones, in most cases without having said goodbye – such is the cruelty of this pandemic.

We hope they will one day be able to put this terrible experience behind them and try to forget. Where deaths have resulted because lessons learned have been deliberately and wilfully ignored by governments, for whatever reason, we should never forget or forgive.