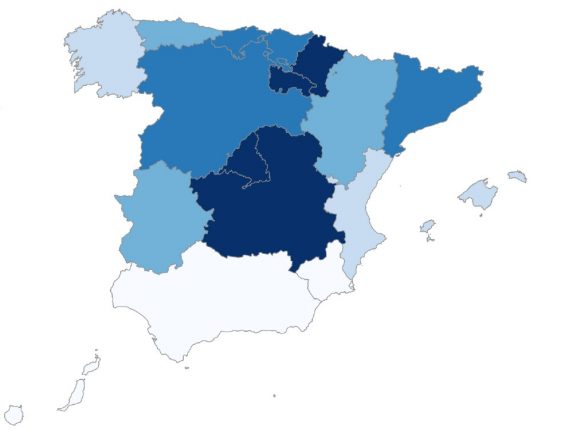 Madrid has been stealing the limelight for all the wrong the reasons.  Its hospitals are at crisis point. The virus has ripped through its elderly care homes. The city’s exhibition centre was transformed into a gigantic field hospital within 72 hours and the ice rink has been requisitioned for use as a morgue.

Yes, as Spain’s capital and the nation’s most populated city it is hardly surprising that it has the lion’s share of cases but the data is still disproportionate. The number of dead in Madrid accounts for more than half the coronavirus deaths across the entire country.

Early outbreaks were detected in Madrid and the Basque Country where the spread of the virus was quick and focused.

But when the government took the decision to close the schools in the capital in a bid to contain the contagion, it may inadvertently have helped spread it.

Faced with the prospect of being cooped up in the confines of a small city apartment, many families took the decision to flee the capital and head either to their holiday home if they had one or back to their ‘pueblos’ were at least there would be family to help with childcare.

So how is the rest of Spain faring? The number of cases in Spain has reached 40,000 with over 2,696 deaths by Monday March 24th. Data: Spain's Health Ministry

Within a few days of the Madrid schools closing but before a general lockdown had been imposed on the nation, cases had been recorded in each of the 17 regions of Spain as well the two city enclaves in North Africa.

The first cases reported in Spain back in early February were on its islands and were ‘imported’; one in a German tourist visiting the Canary Island of La Gomera and a case in a British national who became infected while holidaying with a group at a ski resort in the French Alps before returning to his home in Mallorca. These cases were contained at the time and led to no further infections.

But fast forward six weeks and no-one talks about who caught the virus from whom anymore as Spain approaches 40,000 confirmed cases – although as testing in not widespread and mostly only counts for those who are treated in hospital the true number of infected is likely to be far higher. Madrid has by far the most number of cases, the region home to the bustling capital of 6.5 million had by Monday lost 1,535 people to coronavirus, 60 percent of 2,696 deaths nationwide although its ‘doubling time’ – the time it takes for the number of cases to double stands at around 5.5 days.

Catalonia, a region of 7.5 million has so far recorded 282 deaths with 7,864 confirmed cases although it has one of the fastest doubling times of 3.3 days according to El Pais.

The Basque Country, which has population of just under 2.2 million has the third highest number of cases in the whole of Spain thanks to an early outbreak that spread rapidly in Vitoria.

Andalusia, the region with the largest population in Spain (8.4 million) and second only in geographical size to Castilla-Leon  has relatively few cases considering the size of the population with 2,471 and only 87 dead.

Castilla-La Mancha and Castilla-Leon have the next highest confirmed cases, with close to 2,500 in each although the number of deaths in the former region (216) is almost twice that of the latter (124).

The Comunidad de Valencia also recorded over 2,000 cases amid complaints that they received many Madrileños escaping to their holiday homes on the Mediterranean coast before the country went on lockdown. But they also had an early spike following the return of football fans from a Champions League match against Atalanta held in Milan. The number of deaths there have now reached over 115.

Navarra has a relatively high number of cases considering its population of under 650,000 with just over 1,000 confirmed cases and 31 deaths and neighbouring Rioja counts a similar death toll with 800 confirmed cases.

Both regions border the Basque Country and experienced outbreaks linked to the early one recorded in Vitoria.

Murcia, which complained about hordes of Madrileños coming down to the beach once schools closed has seen releatively few cases with 385 confirmed and 3 deaths.

The Balearic Islands and Canary Islands each have around 500 cases confirmed with ten deaths in the Balearics and 16 across the Atlantic Archipelago.

The region of Galicia in the northwest has over 1,400 recorded cases and twenty deaths while neighbouring Asturias has seen 22 deaths with just 662 confirmed cases. Cantabria reports a death toll of nine with under 500 confirmed cases.

While Ceuta and Melilla, Spain’s north African enclaves have yet to report deaths and the number of confirmed cases remains few.  Both territories have seen the borders closed with neighbouring Morocco and ferry services to the mainland halted.