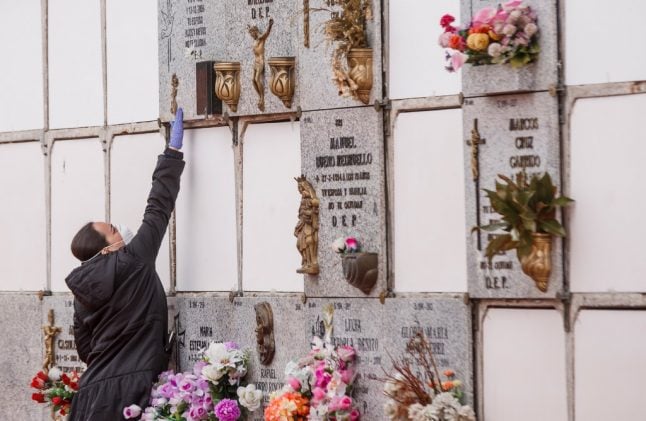 A woman wearing a face mask and gloves touches a niche during the burial of a man who died of the new coronavirus at the South Municipal cemetery in Madrid. Photo: AFP

Spain’s ministry of health has collated all the available statistics up until Friday March 20th to help produce the most comprehensive profiles of those who have not just contracted the virus but been hospitalized from it, and died from it.

The report studies a cross-section of 18.3 percent of the 28,500 cases that had tested positive by Friday lunchtime and the 1,720 of those who died from the illness, a figure that by Monday morning had risen to 33,080 cases and 2,182 deaths.

It shows just how much more vulnerable the elderly when it comes to complications from covid-19 with over 60 year olds accounting for 68 percent of those who require treatment in Intensive Care Units.

Although most people do not require treatment and have symptoms mild enough to stay at home and recover, the stats show that 2.5 percent of those who have tested positive need to be admitted into hospital and cared for in ICU.

However, the figure that represents the number of people diagnosed with the coronavirus is problematic as Spanish health authorities had to limit the tests they carried out on those with symptoms, and for a time only those who have been seen by medical health professionals and treated at hospital were being tested, so the true number is expected to be far higher. Other symptoms include shivering (28 percent) and sore throat (24percent).

But isn’t it only serious for those with pre-existing conditions?

One of the oft-repeated statements about the coronavirus is that those who are over certain age or have pre-existing conditions are at greater risk.

The stats by Spain’s health ministry seem to support that, with 42 percent of patients admitted into hospital and testing positive to the coronavirus have what are considered to be pre-exisiting medical conditions.

Some 22 percent have cardiovascular disease, 10 percent have diabetes and 8 percent suffer from a chronic respiratory condition.

However doctors and health chiefs has also insisted it's not just a disease for the elderly and infirm. Young people too are ending up needing intensive care treatment in hospitals.

When it comes to the coronavirus, the older you are the more vulnerable you become.

The latest data shows that across the whole of Spain, only one case of a child under the age of nine is being treated in hospital. There are no cases of anyone between the ages of ten and 19 being hospitalized so far. Although between the 20 to 50 age group some 13 percent of hospitalised cases have been admitted into the ICU.

The data shows that over half of all those hospitalized across Spain are over 70 years old.

But hospitalized figures don’t really give a true picture of the threat to the aged as many reported deaths from the coronavirus have occurred in residential homes for the elderly in those who were never even admitted to hospital.

Last week in Madrid it was reported that 19 residents had died in one elderly care home while on Monday the army was sent it to residential homes across Spain to support the emergency services.

The data revealed the mortality rate according to age.

This puts the mortality rate in those under 59 at less than 1 percent.

Only five people under the age of 30 have reportedly died in Spain from the coronavirus.

Men are more vulnerable than women

Although men and women are testing positive to coronavirus in similar numbers (51 percent of cases are men and 49 percent women), men are more likely to need medical treatment.

The charts reveal the degree to which men make up a larger number of the serious cases.

However one area where the statistics are weighted is when it comes to health workers who make up 12 percent of all of those who have tested positive to the coronavirus. By Monday, some 3.475 health workers had tested positive across Spain, putting further pressure on a saturated and under staffed health service.