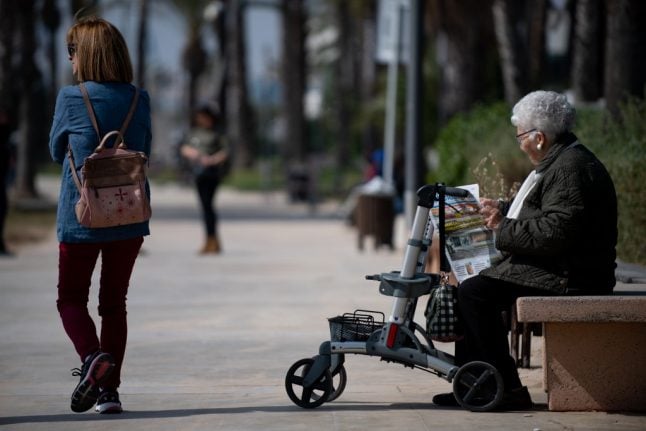 Until now, interior regions like Aragon, or Castile and Leon have come off relatively lightly in a country that ranks fourth in the world for its number of coronavirus infections, with cases soaring towards 20,000 and over 1,000 deaths.

But with the government imposing a nationwide lockdown to try and stem the spread, these provinces are facing a unique challenge: how to look after the frail and elderly living in far-flung communities in some of the least-populated areas of Europe. A man waits for his turn to enter a bakery in Burgos, northern Spain on March 15, 2020: AFP

“She's older and is quite frightened and tense,” he told AFP.

'Isolated but not alone'

In his area, they grow potatoes. One of his neighbours has goats' milk to share while Caminero keeps hens in his back yard.

“I give away the extra eggs. Now the hens are laying all the time and you can get up to two dozen eggs every day,” says Caminero who is confident that if things do get worse, as the government has warned, “at least those of us living in villages will be able to feed ourselves”.

In Teruel, a town in the mountainous Aragon region to the east of Madrid, the local neighbours' association and the town hall have come together with an initiative called “Isolated but not alone”.

One of those they are helping is Maria Garcia, 56, who has a permanent disability following an accident at work. She lives with her 88-year-old father, who is recovering from a strike, her 86-year-old mother, and her dog.

On Wednesday, a volunteer wearing a mask and gloves brought some food to
the house.

“I'd only called to ask and within an hour this young man was here,” says Garcia who says she will keep using the network “as long as we need it and while the situation stays like this”.

'We all know each other' The isolation could end up being overwhelming in areas like Tierras Altas de Soria, a mountainous area of Castile that has seen much of its population leave in waves since the 1950s.

“We cover 16 municipalities, it is an area with a huge decline in residents and a population density of less than two people per square kilometre,” explains local official Raquel Soria.

“In a situation like this, the picture is even worse because the people living here are very elderly, are on their own and they are very isolated.”

Soria said they were trying to ring round the older residents “to see how they're doing”, to encourage them and to offer to drop off some basic goods.

“They're really overwhelmed by the situation but they know it's important that they stay at home,” she told AFP.

In such areas, various local authorities have given out the mayor's mobile number and local officials are delivering food and medicine to the older residents.

“Being a small town of some 2,000 residents, these things are easier. We all know each other,” explains Belinda Penalba, mayor of San Leonardo de Yague, about 200 kilometres north of Madrid.

Not far away in the town of Agreda lives Isidro Omenaca, a weather-beaten 81-year-old with a twinkle in his eye who has been toughened by a life that saw him leaving school at 12 and working as a labourer with his father.

To keep himself in shape, he always takes the stairs and rides his bike to the shops, he cooks for himself and likes to sit in the sun outside his front door. To his mind, the worst years of hardship were those following the Spanish civil war (1936-1939).

These days, people are “more demanding, less disciplined and less willing to make sacrifices,” says Omenaca, who runs a local pensioners' association and who deals with everything with a smile.

“But I'm not depressed!”

In the coming days, the big concern is that the limited medical infrastructure in such areas may well find itself overwhelmed.

“Here there is one intensive care unit with six beds to cover an area of 15,000 square kilometres,” says Manuel Gimeno, spokesman of a small political group called Teruel Exists, that was set up to defend the province's rights.

“If there's a relatively high uptick — and I'm only talking about a few patients — that could block the whole health system in the province,” he warned.

In Soria, where there are 12 intensive care beds for 90,000 residents, there are similar concerns.

Local lawmaker Tomas Cabezon wants the government to guarantee there will be an adequate supply of protective equipment, starting with masks.

“The most important thing is to protect our health workers,” he said.