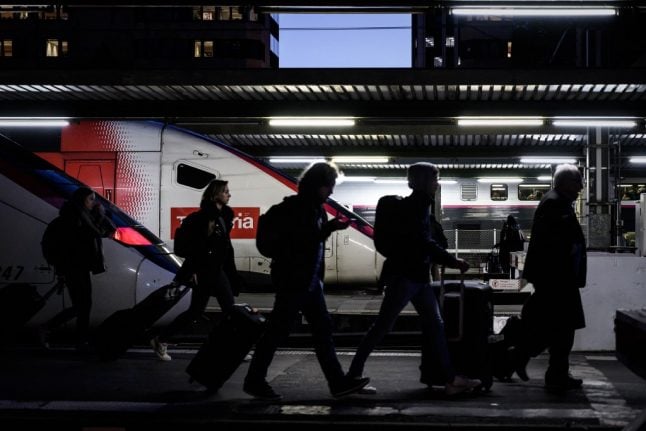 “Parigo home, virus!” proclaimed graffiti pictured in the local newspaper in Cap-Ferret, a small town in southeastern France, employing the derogatory epithet for people from the French capital — many of whom have a second home there.

The image summed up the sentiment of many in an isolated region little affected by the epidemic so far, but now fearing an explosion of imported cases.

Monday night saw Parisians leaving the capital in droves on the eve of a nationwide home confinement announced by President Emmanuel Macron in a bid to halt the virus's spread.

“We knew when the temporary residents arrived because there were so many people in the supermarkets,” said Patrick Rayton, mayor of La Couarde-sur-Mer, a village on the Ile de Re, a bucolic island off France's western coast.

The bridge connecting the village to the mainland was crammed with cars on Tuesday morning in scenes reminiscent of the summer holidays.

The police had to step in at the local supermarket to remind clients of the new health safety rules, which require people to keep a distance of one metre (3.3 feet) from each other, Rayton said.

According to the commune president Lionel Quillet, “the new arrivals were making a run on the groceries, there were tensions with the locals.”

“Later, the weather was nice so they went out for bike rides, or were playing watersports” despite the ban on group activities, he said.

READ ALSO: Coronavirus around Europe: An inside view into the crisis in different countries Further up the coast in Brittany, authorities in the region of Morbihan banned all accommodation rentals on four islands, including the popular Belle-Ile.

“The habitation of furnished lodgings that are not primary residences is restricted to the owner, and in their presence, their children and parents,” according to a government decree.

One major fear is overrunning emergency services and hospitals in rural communities that often are already under-serviced.

“We have a very limited safety net in terms of supplies,” said Denis Pallua, the mayor of Ouessant, one of the islands. “There is only one doctor, we would be very quickly overwhelmed.”

Similar concerns exist in Italy, the European country hit hardest by the coronavirus epidemic to date.

Thousands of people fled Italy's north in the wake of Prime Minister Giuseppe Conte's decree on March 8th to lock down all Lombardy and other affected regions. Only people with legitimate reasons are allowed to travel, and then on presentation of sworn statements to authorities at train stations.

Faced with the prospect of weeks of quarantine, many people originally from the south who work in the north filled trains to return home, causing alarm bells to ring.

Last week, the president of the southern Puglia region, Michele Emiliano, said people from the north continued to arrive, “and with them come thousands more chances of contagion.”

Virology professor Roberto Brioni of Milan's Vita-Salute San Raffaello university noted the risks from the exodus to the countryside, home to large numbers of older people most vulnerable to coronavirus infection and the severe health problems it can cause.

Such a large-scale displacement was “pure madness,” he said, since the travellers “bring infection with them.”

Norway said on Thursday it would ban people from going to their country houses in order to prevent healthcare services in small rural communities from being submerged by the new coronavirus pandemic.

Many Norwegians have in recent weeks fled to their country houses, often chalets in the mountains, in the hopes of escaping the virus thanks to their relative isolation. Some have defied authorities' recent appeals to return to their primary residences. Randi Hausken/flickr
The government had for several days been threatening to introduce a ban if people did not heed authorities' calls, and finally made good on its threat on Thursday.
“It's a decision that, in the end, I had hoped we wouldn't have to take but we will ban stays outside (people's) residential municipality,” Health Minister Bent Hoie said.

Spanish region up in arms

In Spain, the southeastern region of Murcia, renowned for its beaches and agricultural hinterland, is confronting a mass influx from Madrid.

Furious, regional president Fernando Lopez Miras lamented that an infection-prevention lockdown has instead been “converted into a sort of holiday on the coast.”

Last Friday, he decreed the immediate lockdown of all tourist zones in the region.

Meanwhile, the rural Perigord region in western France saw its first coronavirus case diagnosed on Wednesday: a Parisian, according to health professionals, who is hoped will remain an isolated case.