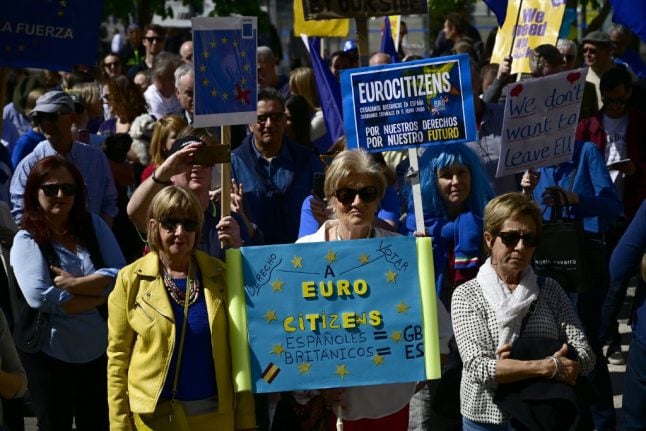 Demonstrators hold placards during a protest in Madrid organised by the EuroCitizens group in defence of the rights of Europeans in the UK . AFP

UK nationals in Spain told researchers they felt “confused, fearful and in the dark” about their lives as Europeans.

A lack of clear information, unresolved questions and confusion over residency regulations are some of the main problems, according to the study by Goldsmiths, University of London.

Many have also been left with the sensation that Spanish government has also washed its hands of British residents.

There is now an urgent need for a clearer sense of policy direction to help UK citizens living in the EU through the post-Brexit “no man’s land”, the report concludes.

Brexit and the British in Spain, was conducted between 2017-2020 and involved interviews with UK nationals living Spain.

Between 300,000 and 1 million British people live for at least some of the year in Spain, making the country home to the largest population of UK nationals in the EU.

Crucial unresolved issues include the value of pensions and other income exported from the UK; continued freedom of movement within the EU; and the terms on which Britons in the EU would be able to return to Britain with non-British partners, researchers found.

These uncertainties are compounded by confusion at the local level.

In Spain, UK nationals are confused about regulations, unsure where to go for advice, and sometimes given misleading advice.

Applying for residence permits has had uneven outcomes.

Personal circumstances such as chronic and terminal illnesses, periods of unemployment, reliance on benefits and relationship breakdowns, have also made some people ill-placed to respond to the challenges Brexit presents for their lives, the report found.

In Spain, these challenges were further exacerbated because the UK and Spanish governments (and UK and Spanish media) still tend to treat UK nationals as “long-term tourists”, even though the classic stereotype of the older, white, retired and working class British expat is well out of date.

Professor Karen O'Reilly, author of Brexit and the British in Spain, said today there are British people of all ages and backgrounds living in Spain, including young people fluent in Spanish, working in cities and bringing up children.

“Every kind of diversity that exists in the UK also pertains to the British in Spain. But this gap in understanding of their lives means that the needs of Britons in Spain are persistently overlooked, denied or dismissed,” she added.

The Local has asked Britain's Foreign Office to comment on the report.

A spokesperson said a reaction would be forthcoming but made it clear that they found the findings of the report unfair and that it did not take into the account the work they had been doing.

Charities are being given a share of £3 million in funding to help UK nationals apply for residency to continue living in the EU after Brexit.

Residents in Spain,  France, Germany, Cyprus and Italy, among other countries, will be able to seek advice from the organisations being handed the cash, the Foreign and Commonwealth Office said.

The Government fund particularly aims to help pensioners, disabled people, those living in remote areas or those who need language translation with the paperwork and is in addition to guidance provided by British embassies.

“My wife comes from the Philippines and Spain has been far more welcoming than the UK when it comes to immigration,” he said.

“An undercurrent of change in the UK gave us concerns about living in the UK having mixed-race children. Where we are in Spain, we don't see any issues but even when working in the UK I have had to deal with the odd racist remark.

“Do I have the right to bring my family to the UK? There are entire forums dealing with the treatment of Brits with non-EU partners and families. As for ourselves, I do earn a good income and often have to travel to commute to the UK due to the type of work I do. But the UK has changed a lot in the last few years to the point I know of multiple Brits with EU and non-EU families heading into Europe as they feel the UK is no longer their home.”