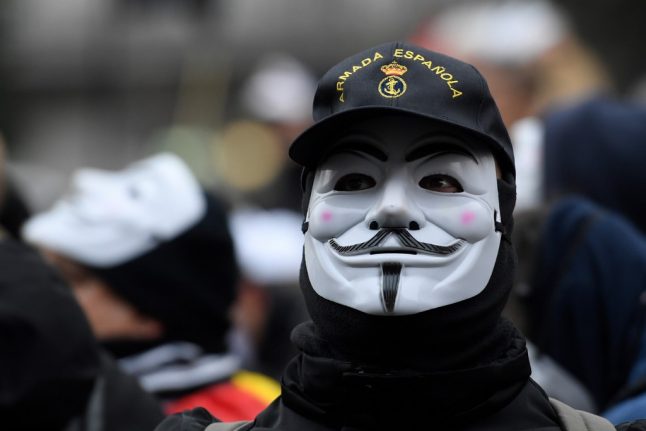 The police officers wore Anonymous masks as they took to the streets in protest. Photos: AFP

Thousands of national police held a tense demonstration in Madrid on Tuesday, demanding salaries in line with those of their better-paid counterparts in other Spanish regions. Dressed in civilian clothes, most wearing black-and-white Anonymous masks, they gathered outside the parliament, shouting, whistling and firing flares, some engaging in minor scuffles with the officers drafted in to secure the
demonstration.

Police sources said “at least 2,000” demonstrators joined the protest, some carrying banners reading “We're sick of it”, others wearing slogans reading “equal salaries” or even “traitors”. Unions called the protest over discrepancies between the salaries of the national police and those in the autonomous regions of the Basque Country, Navarre and Catalonia. Although they work alongside each other, the regional forces benefit from a more generous pay packet.

“The real problem is that for doing the same job, the regional police are earning about 600 euros each month more than the state police,” said Pablo Perez, spokesperson for JUPOL, the main police union.

“It should be the same salary.”

Fellow union member Manuel Fernández, who comes from the northwestern Galicia region, said they were fed up. “It's been three years that we've been asking for equality.. the colour of your uniform shouldn't be what decides your salary,” he told AFP. Police demostrators removed protective barriers from outside Spain's parliament and piled them up.

In a statement, the union said it called the protest after the government of Socialist Prime Minister Pedro Sanchez ruled out a “popular legislative initiative” to impose “true wage equality” across the country.

The issue of wage equality between the national police and the Catalan police, the Mossos d'Esquadra, has been a particularly sensitive issue since the region's separatist leaders staged a banned independence referendum in
October 2017. Officers from the national police complain they are seen as “pariahs” in the region not only over the salary issue but for obeying a legal ruling against the referendum, which went ahead anyway but was marred by police
violence.

Among the demonstrators on Tuesday were several MPs from the far-right Vox party and from the opposition conservative Popular Party who both expressed support for the protest, as well as representatives of France's largest police union Alliance.