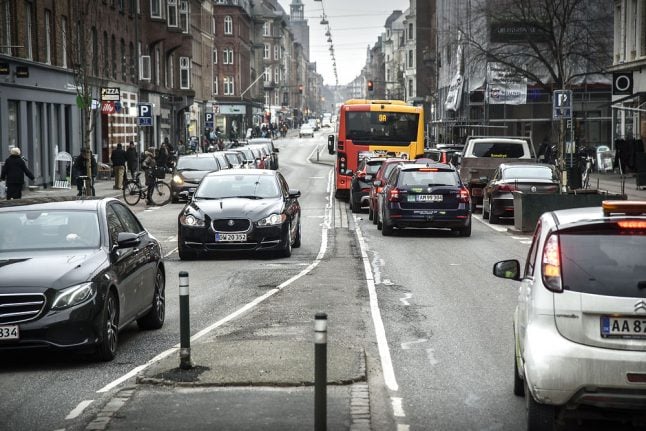 Traffic and construction in Copenhagen. One in five people across Europe suffer due to noise pollution, according to the European Environment Agency. Photo: Niels Ahlmann Olesen/Ritzau Scanpix

“Notably, the objective set for 2020… of decreasing noise pollution and moving towards the WHO recommended levels for noise exposure will not be achieved,” the agency said in a statement.

It added that in fact “noise pollution is projected to increase because of future urban growth and increased demand for mobility.”

Noise pollution, especially at night, affects public health across Europe, as noise can disrupt sleep, and chronic noise is known to cause cardiovascular and psychophysiological effects as well as reducing cognitive performance.

According to the EEA, an estimated 113 million people across Europe are affected by long-term traffic noise levels.

In addition, 22 million suffer from noise pollution from trains and four million from aviation.

“In most European countries, more than 50 percent of inhabitants within urban areas are exposed to road noise levels of 55 decibel or higher during the day-evening-night period,” the EEA said, putting them above the above the 53 decibel recommended by the World Health Organization (WHO).

Noise pollution also has a real impact on people's health.

According to the agency, such exposure could be traced to the 12,000 premature deaths and as a contributing factor to cognitive disorders in 12,500 children in Europe.

European decision-makers, at both local and national levels, must roll up their sleeves in order to reduce noise levels, the agency said.

“Really looking at addressing urban mobility and moving away from vehicular transport… facilitating active transport like cycling and walking but also public transport can really have the most significant impact,” Catherine Ganzleben, head of the EEA's Air Pollution, Environment and Health Department, said at a press briefing.

She noted that these measures, some of which have begun to be implemented, will also help to improve air quality in European cities.

Are you affected by noise pollution? Where do you live in Europe and how does the noise there compare to other cities or countries? What do you think local or national authorities can or should do? Let us know your thoughts — we'd like to hear your perspective.