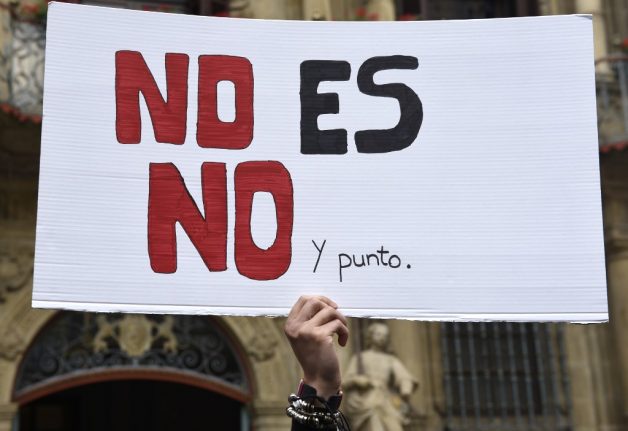 A protester with the slogan "No means no, full stop" Photo: AFP

The measures have been called for in the wake of “La Manada”, a notorious gang rape of a teenager during Pamplona’s San Fermin fiesta in 2016 that shocked the country.

That case highlighted how under Spain's current criminal code, a rape could only be legally seen as such if there was evidence of violence or intimidation.

This highly contentious legal nuance is often tough to establish – and it played a central role in the gang rape trial.

The court acquitted the five men of sexual assault, which includes rape, instead handing them nine years for the lesser offence of sexual abuse, finding no evidence of violence or intimidation because a film recorded on the mobile phone by one of the gang showed the victim was “passive” during the prolonged attack.

The verdict sparked mass protests across Spain with women taking to the streets with the slogan “I believe you”.

In June 2019, the Supreme Court overturned the verdict, finding all five guilty of rape and upping the sentence to 15 years each. A poster showing mugshots of the “wolf pack” held up during a protest. Photo: AFP

But the case also sparked a movement to change the law, led by Irene Montero, a member of the radical leftist Podemos who was appointed Equality Minister in the coalition government of Prime Minister Pedro Sanchez.

“Until now, women have faced a string of obstacles: they had to prove there was force, violence or intimidation in order to speak of sexual assault,” said Equality Minister Irene Montero told reporters.

“Now we won't have to prove there was force, as the idea of consent is at the heart of every legislative action,” she said.

So what will change?

According to a draft of the Sexual Freedom Act, as the proposed law is called, “consent does not exist if the victim has not clearly shown by a conclusive and unequivocal outward expression… her express wish to take part in the act.”

Thus it has been dubbed the “only yes means yes” law.

“This is the law of the women's movement which has fought persistently and tirelessly in the streets,” Montero explained.

Under the new Sexual Freedom Law, any penetration without consent will be seen as rape, punishable by between four and 10 years in jail while aggravated rape will command a higher prison term, with a maximum of 15 years.

Judges will also be able to pass tougher sentences if violence or drugs are used to incapacitate the victim, or if she is the wife or former partner of the rapist.

The draft law also proposes jail penalties for work-related sexual harassment of up to two years and to make catcalling – sexually harassing a stranger in the street – a criminal offence.

The bill, which will likely be debated in parliament over the course of several months, also qualifies forced marriage and genital mutilation as sexual offences, and removes the distinction between sexual abuse and the more serious charge of sexual assault, the minister said.

The draft legislation was unveiled ahead of International Women's Day on March 8th which in recent years has seen vast marches and strikes by women across Spain. And everyone must support this, right?

Strangely enough not. Opposition to the new law has been raised among the conservative PP party and far right Vox.

Cayetana Alvarez de Toledo, spokesman for the conservative Popular Party in the Spanish parliament, said: “In reality, are we going to convert sexual relations into a process of interrogation? A 'no' is a no, obviously. But is a silence also a 'no' or a 'yes'?”

Meanwhile Jorge Buxade, an MEP for the right-wing Vox party,  insisted: “This law discriminates unfairly in favour of women and against men. We want to defend women and men equally from sexual violence.”

READ ALSO: Why the US is warning its citizens about sexual assault in Spain