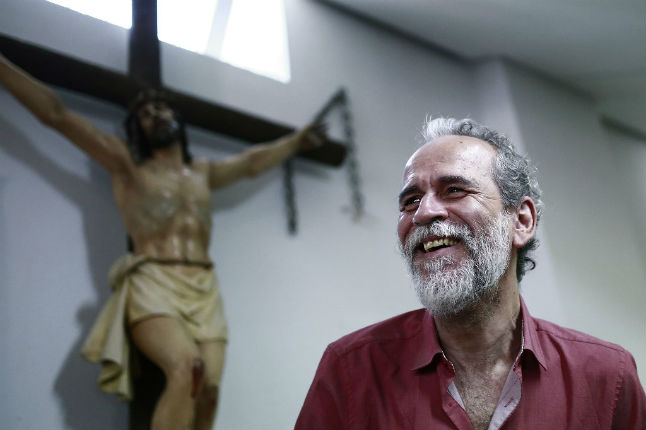 Spanish actor Willy Toledo holds a press conference at the San Carlos Borromeo parish in Madrid. Photo: Benjamin Cremel/AFP
Toledo, a film and television actor, went on trial February 17 over comments posted on his Facebook account in a high-profile case that fuelled worries over freedom of speech.
Oscar-winning Spanish actor Javier Bardem spoke out in support of Toledo, saying the country risked a return to the repressive era of dictator Francisco Franco.
The case stems from a 2017 message in which Toledo, 49, defended three women charged with blasphemy for staging a mock-religious procession wielding a giant vagina.
In profane language, Toledo expressed contempt in his post for God and the Virgin Mary.
Toledo's comments upset the Spanish Association of Christian Lawyers, which ended up denouncing him for offending religious sentiment, a crime punishable by a fine.
But in a ruling dated February 21 and released on Saturday, the judge in the case said she saw no crime.
“From the tenor of the published remarks and their context, the lack of education, bad taste and foul language used by the accused is evident,” the ruling said.
“But they are not in themselves a commission of the crime of offence against religious sentiment.”
During the trial, the actor said his intention was not to offend anyone's religious feelings, but rather to make a political point.
Toledo is known in Spain for his roles in films and television series, but also for several controversies, some of them related to his defence of the governments of Cuba and Venezuela.
Pablo Iglesias, Spain's deputy prime minister and leader of the radical left Podemos party, called the case “nonsense.”
On Saturday he wrote on Twitter that the acquittal was “common sense.”