Guiris in Spain are taking to Twitter to vent their frustrations about life in the country. Here The Local has selected some of the funniest and truest tweets.

Life in Spain is pretty fantastic, right? First there's all that sun, then you've the friendly people and the cheap food and drink. But even in paradise, there is always going to be that occasional, unbelievably frustrating Only in Spain moment.

When that happens, where else to go but Twitter? And whether it's late nights, loud neighbours, or the difficulty they face in finding their favourite foods, it turns out Spain's guiris (foreigners) have found plenty to grumble about.

Here's The Local's compilation of complaints about Spain on Twitter.

One of the hardest things to get used to in Spain as a foreigner is time-keeping and the Spanish habit of always arriving at late.

Woe betide you if you actually turn up on time:

Showed up half an hour late to this birthday party, here before the owners of the house. #SpanishProblems

Some guiris manage to get the hang of it.

Today I was an hour and a half late meeting a friend, I think I’ve lived here too long #spainproblems

Timing is also hard to deal with when it comes to mealtimes and the nocturnal nature of the Spanish.

When it's 11:24pm and you are just sitting down at the table to eat dinner #Spainproblems

Yesterday I went for dinner and came home at 6am #spainproblems 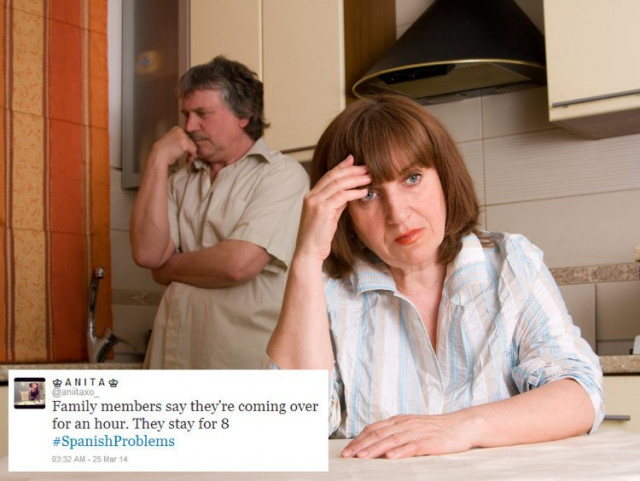 And when it comes to getting things done, especially bureaucracy, don't look to Spain for efficiency.

Average time it would take for a task to be completed in Canada: 1 hr. In Spain: 7 days #frusterated #spainproblems

Then there's the language problems.

1: I’m going to pay the internet

2: I’m going to turn off the internet

Oh what a difference an 'ñ' makes!

And what happens when you get so used to saying things the Spanish way that your friends back home think you're really strange.

Getting the hang of the local customs can be tricky too.

And what is it with those light switches??!

Is it the hall light or is it a doorbell? Welcome to Spanish roulette #SpainProblems #SorryNeighbor

Let us know on Twitter (@thelocalspain) any particular #spainproblems of your own.

READ MORE: Seven habits you will never be able to truly master like a Spaniard Self-employed in Spain: What you should know about being ‘autónomo’ Property in Spain: What I wish I’d known before buying a rural retreat to renovate How much does it cost to have air conditioning at home in Spain? The essential road signs you need to understand in Spain