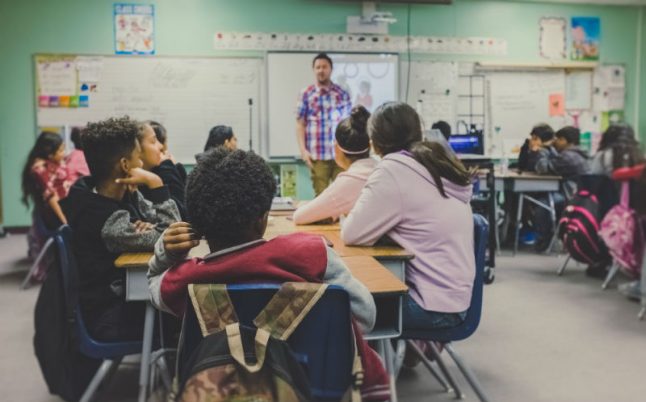 Photo by NeONBRAND on Unsplash

It's the big issue in Spain this week but what is the “parental pin” and why is everyone talking about it? Conor Patrick Faulkner in Murcia explores the issue.

Murcia, a region that recently lurched rightwards and ultra-right Vox won the highest vote share, is engulfed by bitter debate about education policy and whether parents should have a say in what their children are taught in schools.

Introduced in September, the policy allows parents to veto their children’s involvement in certain educational workshops, but the controversy is already resonating beyond Murcia’s borders and catching the attention of national government, media and consciousness.

The controversy has arisen from Vox’s “Parental Pin” policy, in effect a veto that allows parents to prevent their children from partaking in complementary school workshops that incorporate “ideological or moral leaning against their convictions”. The workshops are not voluntary after school activities, but part of the basic curriculum within normal school hours.

The pin policy states that schools must now obtain the permission of parents “through an express authorisation” in order to run workshops or activities discussing social and ethical values, particularly what Vox deem “sexual morals”. Vox has faced widespread criticism for reactionary positions on immigration, abortion, homosexuality, minority rights, gun control and Islam, among others.

Vox’s website frames the policy as a necessary response to “the obvious indoctrination in gender ideology that our children suffer in educational centers”. Santiago Abascal, Vox’s leader, claims the parental pin is to protect children, but critics suggest it is part of broader attempts to stifle debate on topics diverse as gender, drug abuse, bullying, sexuality, feminism and climate science. The policy has been operating in Murcia since September, was included in Vox’s manifesto programme for last April’s elections but has only recently garnered national attention. The policy attracted national media coverage – and the eyes of Madrid – when Vox, kingmakers in Murcia’s right-leaning coalition including PP and Cuidadanos, made their support for the Murcia annual budget conditional on the inclusion of the Parental Pin policy in the region’s educational agenda.

Although the parental pin is yet to be legislatively enshrined, and Cuidadanos had originally opposed it – deeming it a “red line” – they eventually succumbed, and Murcia’s budget was agreed as part of a deal that allows “families to educate their children freely, without any kind of impositions, through the express permission of families when it comes to their children’s participation” in extracurricular programmes.

Not only is the outrage surrounding the veto spreading throughout Spain, but similar political gamesmanship could soon be seen in other regional governments as Vox also prop-up coalitions in Madrid and Andalucía.

Opposition to the policy has been diffuse, including student unions and feminist and LGBT groups. Spain’s new national coalition, made up of the governing Socialist Party (PSOE) and anti-austerity Podemos, has also condemned the pin policy. Victoria Rosell, government spokesperson for gender violence, went as far to suggest that the parental pin could justify enactment of the Spanish Constitution’s Article 155.

This could see regional powers suspended in Murcia and central government taking control, or those behind the policy taken to court unless it is withdrawn. Isabel Celaá, PSOE education Minister, also suggested that the pin policy could be legally challenged on the basis that it “seeks to undermine the right to education and censor the actions of educational centers and their professors.”

The policy, she argues, contravenes the “integral training of students” as outlined in Article 1 of the Education Law. In a recent interview with El Correo, Celaá said that a “homophobic family… does not have the right to make their children homophobic as well”, adding that “parental authority cannot be confused with property”. However the Murcian president, PP’s Fernando López Miras, has thrown his support behind Vox and said he himself is willing to go to court to defend the parental pin.

The policy has also faced opposition in other regions. Education counsellors in nine autonomous communities governed by PSOE recently signed an open letter to El Pais decrying it as an attempt to “break the school life and the culture of dialogue and deliberation to impose a blind and uncritical authoritarianism”.

PP leader Pablo Casado, on the other hand, has accused the newly installed government of weaponising the furore over the policy, suggesting it is a distraction from their decision to appoint a former justice minister, Dolores Delgado, as Attorney General and the perceived blurred lines between judiciary and executive that followed.

What do parents and teachers think?

Parents and teachers in Murcia have also criticised the policy. One parent from the Murcia suburbs  believes the pin is a solely political issue that has needlessly“crept into the school”. Many teachers lament the increased bureaucracy the policy forces upon schools, and feel that regional government have failed to offer the appropriate resources to cater for children whose parents do not give authorisation.

Talking exclusively to The Local, one Murcia high school teacher suggested she “strongly believe[s] that parents that ban the attendance of their children to these activities should think about changing school and enrolling them in private schools”.

She went on to say: “Education should guarantee that every child receives knowledge based on universal principles [of] equality, freedom, freedom of speech and encompass[es] a wide range of issues”.

Another local teacher disagreed, however, arguing that “parents have a right that is in the Spanish Constitution and it is not being respected by the central government”. Intervention from Madrid, he felt, would both compound the disjuncture between national and regional executives, and exacerbate Murcia’s already fractured political system. Photo by Element5 Digital on Unsplash

It's all about the constitution

Much like in the American political sphere, disparate political ideals are being justified by the same constitution, prejudicially interpreted by both sides to conform with their visions of what kind of country they think Spain should be. One Murciano teacher believes parents have a constitutional right to veto, another believes education should guarantee these workshops.

The governing PSOE and Podemos coalition claim the pin policy “goes against constitutional values”; Vox claim on their website they oppose “sexual education that flagrantly violates article 27.3 of the Spanish Constitution and the rights that they attend as parents”. Much like in Britain and the United States, it seems the Spanish centre ground is dissolving.

Education policy unsurprisingly evokes strong sentiment, however it could be that the Parental Pin controversy is also indicative of the global ideological battle between populist and identity politics, symptomatic of conflicting conceptions of what it means to be Spanish and a precursor for more political strife. It is more than plausible that these divisions could similarly manifest themselves in healthcare, immigration or defence policy.

In the midst of Spain’s recent political turbulence and distrust of its political system, anti-establishment populist undercurrents have, in places, manifested themselves through Vox and it seems the type of centralised government action proposed by Rosell would only serve to heighten this alienation.

Indeed it seems no coincidence that Vox’s choice of language for the policy agenda: a “parental pin” as opposed to a veto or embargo or ban, is a direct linguistic ploy that plays on notions of protecting children from violent or sexual material in technology, a well known parental norm in today’s society.

By importing this language into the educational sphere, Vox seek to frame the policy not in terms of censorship but safeguarding, further stoking fears of a Spanish identity under threat whilst chiming in with populist talking points on gender and sexuality in what they perceive to be an increasingly liberal and secular society.