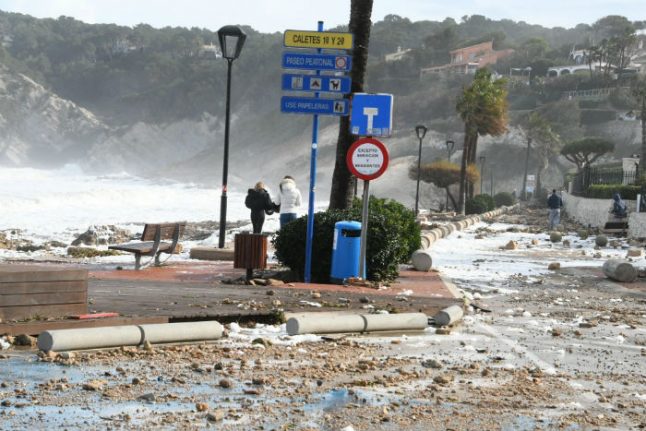 The first fatality occurred in Asturias when a 44 year old man was killed by a truck skidding out of control as he attempted to put snow-chains on his car at the side of the road.

A homeless woman from Romania in her 50s died of exposure after sleeping in a park in Gandia on the Valencian coast.

A 63-year-old Spanish man was found dead on Sunday afternoon in the central village of Pedro Bernardo, the village's mayor David Segovia said. A group of people walk with difficulty due to the strong wind at La Malvarrosa beach as storm Gloria batters Spanish eastern coast in Valencia on January 20, 2020.

“He was lying on his property with a head injury caused by tiles which fell because of the snow,” Bernardo told AFP.

Much of eastern Spain as well as the Balearic Islands in the Mediterranean were still on alert Monday after Storm Gloria hit Spain over the weekend. In the interior of Valencia, fire fighters were sent out to clear the roads of snow, while in the Balearic Islands roads were closed as rivers burst their banks after 24 hours of torrential rain.

Seaside towns from Torrevieja in the south of the Valencia region to Castellon in the north were counting the cost of the damage caused by massive waves pounding the shore during the storms.

Some 200 schools remained closed on Monday in the Valencia region while the journeys of some 22,000 travellers through Alicante airport were disrupted as the authorities closed air travel for the duration of Monday.

Spain's weather agency AEMET issued warnings for the “eastern third of the Peninsula and the Balearics” for “wind, rain, snow and waves” that would continue until Tuesday.

Heavy snow was recorded in the interior of Valencia, as these pictures from Biar and Banyeres de Mariola show.

Along the coast in Javea, (Xabia) the coastline took a battering. Images show a damaged promenade, destroyed restaurants and shop fronts and flooded roads.

In Mallorca, at least nine roads were blocked with flooding and landslides.

Alicante airport remained closed and was not expected to open until Tuesday when the storm had passed.