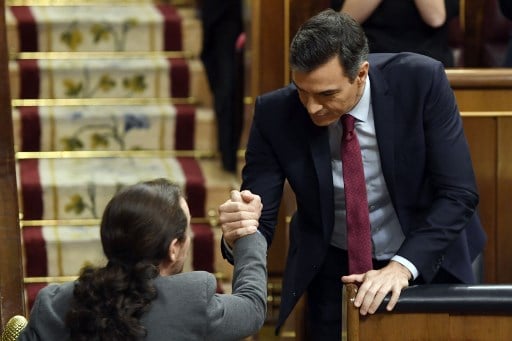 The official statement from his office came just two days after Sanchez won an investiture vote, paving the way for a new government following nearly a year of political deadlock.

Iglesias will serve as one of four deputies, three of whom will be women. Sanchez's current deputy, Carmen Calvo, will continue in the role but will also be joined by current Economy Minister Nadia Calviño and Environment Minister Teresa Ribera.

Two other ministerial posts were handed to members of the far-left Unidas Podemos coalition, with lawyer Yolanda Diaz to serve as labour minister and communist MP Alberto Garzon to hold the consumer affairs portfolio, while sociologist Manuel Castells, who is close to Podemos, will head the universities ministry.

The full cabinet lineup will be unveiled “in the coming days”, the statement said.

Sanchez takes over as head of a minority coalition government after winning investiture by a razor-thin margin of just two votes.

But with only 155 of the parliament's 350 seats, the new government will struggle to push through legislation, with its first order of business to pass the long-overdue state budget.

It will be Spain's first coalition government since the 1930s.