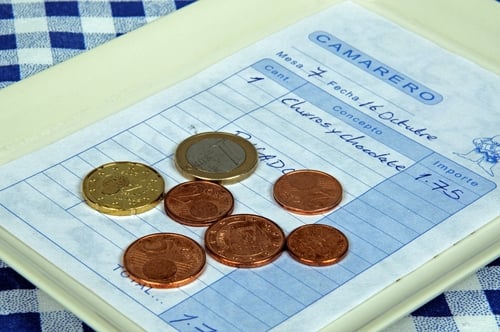 It can be a minefield to navigate local customs and etiquette and tipping is one of those issues that comes up regularly among the newly-arrived and visitors to Spain.

Everyone knows that a 15-20 percent is expected on restaurant bills in the USA but what’s the convention in Spain? In the UK, a service charge is often included on the bill but in Spain is a tip expected? And if so, how much?

We turned to the experts to find out.

James Blick, the New Zealander who co-founded Devour Tours in Spain tackled tipping in a Youtube video where he described the issue as “such a confusing concept”.

“It’s not a calculation like you might do in the States. The bars and waiters don’t rely on tips, they earn a full salary, even though it might not be that that much.”

His guideline is “If you stand at the bar for coffee or beer you might leave ten cents. If it’s a sit down meal worth €30-40 then you leave €2 or €3, it’s not a massive calculation.”

Valentina Ruffoni , a Brit who has lived in Madrid for three years and runs the highly successful food and drink community, Eat Out Madrid, argues that tipping is only necessary when service has been exceptional and then a handful of coins is sufficient.

“Unlike other cultures tipping is not something that is compulsory or expected here, and many could argue that as a result of this the customer service does not always meet the standard you’d desire. However, if you do feel you want to give something and the staff were particularly friendly and efficient then a handful of small change is more than enough.”

For Americans, the tipping culture in Spain is particularly hard to adjust to, explains Karen Rosenblum, an American travel consultant living in Madrid and the woman behind Travel Spain! Which she describes as a Facebook community for Spain travellers (and travel dreamers) who want to discover Spain more authentically and (a bit more) off the beaten path. “When I go out for a meal and the service is good (by Spain standards), I usually leave a few coins. That took a lot of getting used to! In the US you tip for everything, and these days it’s in poor taste to tip anything less than 20 percent for a meal out, at least in California.”

So what advice does she have? “Since most of my clients are from the US, I give them some tips for tipping in Spain before they depart:   Tipping is optional and anything over 10percent at a restaurant is considered absurd.  Remember that restaurant staff in Spain makes a living wage. There is no need to tip the bartender for every drink. In a taxi, simply round up to the nearest Euro if paying with cash.

“And don’t even think about adding a tip with your credit card; credit card machines don’t offer that as an option here in Spain like they do in the US.”

Spaniard Javier Salas tackled the subject on Quora: “As a general rule, in Spain you do not leave a very large tip, the tip that is left depends on the quality of the service,” he wrote.

“If it has been normal you can leave some loose coins (or none); if it has been good you can leave part of the coins returned if you pay with a note (one euro or two is perfectly acceptable). If the service has been really extraordinary the tip may be higher (5-10percent ) but only in completely exceptional cases.”

If you do decide to leave a tip and are with Spanish friends, you might find yourself being chastised for your generosity.

“It’s quite common for a battle to commence when I try and leave a tip when out with my Spanish boyfriend,” revealed one American working as an English teacher in Madrid.

“He always says I leave too much and whisks it away before the server can collect it.”

One Swede admitted that he often sneakily leaves coins behinds his Spanish friends’ backs because he is embarrassed about how little they tip.

“I have a friend that never ever leaves tips and another that leaves like 20 céntimo or less,” he told The Local. “I always have to leave more behind their back!”

A tip in Spain is known as ‘una propina’ and in many bars and smaller family run restaurants, tips are often pooled together in  ‘el bote’ – effectively a jar on the bar – that is then divided equally between all workers, including unseen kitchen staff.

If you are lucky and listen for it you might find the server adding any coins left on the counter to this communal piggy bank with a cry of “booooote!”.

From detergents and air fresheners to window cleaners and floor cleaners, Spanish brands have found a unique niche in the UK.

The realisation began when a Spanish resident of the United Kingdom  – @La_exquis tweeted her surprise at discovering the British obsession with Spanish cleaning products and it went viral.

Many of the outlets selling the brands said that UK customers loved the scents of the Spanish cleaning brands and one even claimed that it “transports you back to a sunny villa in Spain”.

Brands such as Nenuco, Asevi and 3 Brujas were found to be some of the best-loved products in the UK, but the craze didn’t just stretch to cleaning labels. Many body care companies such as Heno de Pravia and Don Algodón had also found a fan base among the Brits.

A quick search on Google comes up with a multitude of British pages dedicated to the sale of Spanish fabric softeners, floor cleaners, window cleaners and air fresheners, such as The Little Spanish Cleaning Company and Spanish Cleaning Products UK. Some products can even be found on the Amazon UK site.

But they are not only sold through web pages, Instagram is also pushing these items with many people buying directly from accounts.

“The products are obviously expensive due to Brexit” the user commented on Twitter.

In fact, when making a comparison between the prices of these items, the difference is astonishing.

Nenuco cologne, one of the most successful products in the UK, costs more than triple the price of a 600ml bottle sold in Spain.

In Spain, it costs just €2.65 while in the UK the same bottle is €11.21, but fans still seem willing to pay for a little slice of Spanish zing.

“It smells exactly like vacations in Spain when I was little,” wrote a user in one of the product reviews, summing up one of the reasons for the products’ success in Blighty.