The two parties argue the measures are needed to fight economic inequality but company lobby group CEOE has warned that their economic programme is “close to populism” and will have a “very negative” impact on job creation in the country, the eurozone's fourth-largest economy.

The following are some key measures proposed by Spain's new government:

The coalition has vowed to roll back some changes introduced by Spain's previous conservative government in 2012 during the height of the country's economic crisis to make the labour market more flexible by making it easier and less expensive to fire workers.

It wants to eliminate or severely restrict the reform's more controversial measures such as the authorisation to fire workers on sick leave or unilaterally change a job contract.

Former Prime Minister Mariano Rajoy credited his labour market reform for a sharp drop in Spain's sky-high unemployment rate but critics say it has caused salaries to fall and led to a rise in unstable, temporary work.

His new coalition government wants to increase it further by the natural end of the legislature in 2024 to 60 percent of Spain's average monthly salary which currently stands at €1,970.

Pensions will once again be linked to inflation, which has not been the case since 2014.

The government wants to raise income taxes on those earning more than €130,000 per year, and set a minimum corporate tax rate of 15 percent, while banks and energy firms will have to pay 18 percent.

The goal is to prevent companies from using tax deductions and loopholes from paying far less than the current official corporate tax rate of 25 percent.

Spain's largest union, CCOO, has said the government's overall programme is “positive” but criticised a “lack of ambition” regarding taxes, recalling that Spain's tax rates are lower than the European average.

The coalition wants to give mayors of cities struggling with “abusive” rent hikes to temporarily impose rent ceilings.

Madrid and Barcelona have in recent years seen rents skyrocket, in part due to the rise in popularity of renting homes to tourists on home-sharing platforms such as Airbnb which has decreased the number of properties available for longer-term rental.

The proposal has sparked an outcry from the real estate sector which argues it would discourage investment in properties built with the goal of being rented out, which would worsen the housing shortage.

The coalition agreement between the two parties vows to “respect the mechanisms of budget discipline” without setting a specific target for the reduction of Spain's debt, which stands at nearly 100 percent of the country's
economic output.

“While the formation of a government is certainly welcome news for the Spanish economy after months of political standstill, it does not change the overall picture of an increasingly fragmented and polarised political system,” warns Ángel Talavera, Eurozone economist at Oxford Economics.

“The implementation of reforms that require ample consensus remains unlikely, leaving a lot of unfinished business at a time when the economic outlook is deteriorating. And with the Catalan independence issue permeating all aspects of Spanish politics, the governing coalition’s dependence on the support of pro- independence parties makes it very unlikely that it will be able to last a full four-year term.” 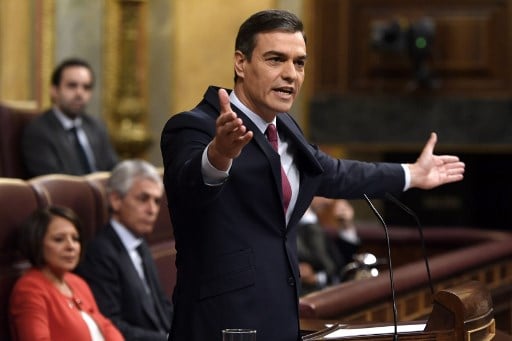