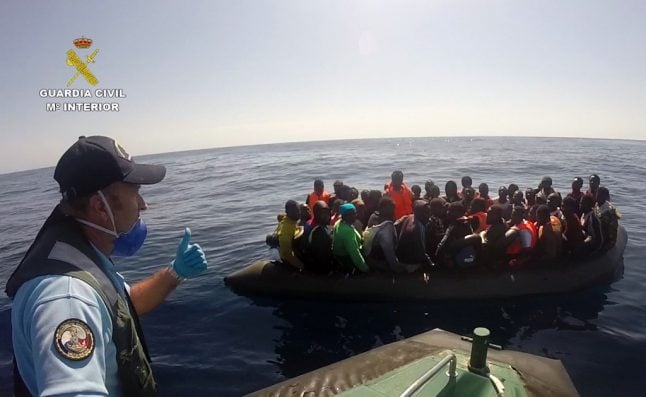 A handout picture released on 2015 taken around the Zaffarin islands off Morocco and the tiny islet of Alboran, where 120 migrants were rescued this Christmas. Photo: Guardia Civil/AFP

More than half of them were found off the Costa Blanca on Spain's southeastern coast, with 10 people rescued just before dawn, among them eight men, a woman and a child.

Later in the morning, rescuers saved 16 men off a boat near Torrevieja, while another 12 men were rescued from a dinghy off Xabia, some 45 kilometres (27 miles) up the coast from Benidorm.

And on Spain's southern coast, 17 men were found in waters off Cabo de Gata near Almeria while another man was found floating on what rescuers described as “an inflatable toy boat” in the Motril area, with his friend feared drowned.

Another 39 people reached the shore at Punta Jandia on the southwestern tip of Fuerteventura in the Canary Islands, the spokesman said.

There was no immediate information on the nationalities of those rescued.

Some 200 others were rescued on Christmas Day in a number of separate operations off the coast of Spain and Morocco.

About 120 of them were picked up around the Zaffarin islands off Morocco and the tiny islet of Alboran, Spain's coastguard said.

Several other dinghies were found off the southeastern coast of Spain, off Gibraltar and near the Canary Islands.

So far this year, at least 1,250 men, women and children have died attempting to reach Europe via the Mediterranean, the UN's International Organization for Migration said in a statement correct to December 20.