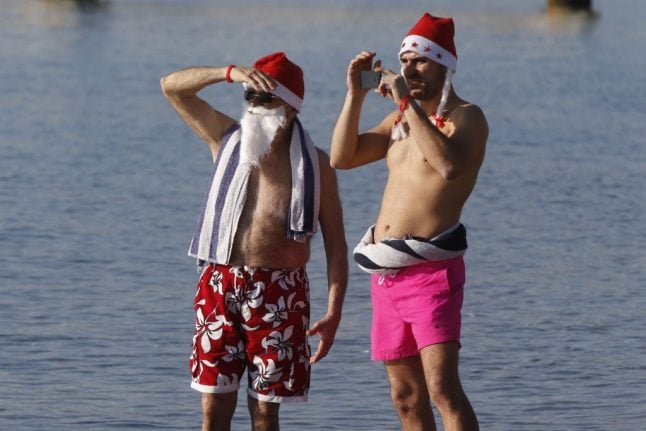 People in southern and eastern Spain could quite easily spend this Christmas on the beach. Photo: AFP

Spain won’t be getting a white Christmas this year, with temperatures across much of the country expected to rise by several degrees and clear skies forecast for much of the territory.

In southern and eastern Spain, the mercury is expected to go over 20C, a difference of up 10C compared to last weekend’s temperatures.

This good weather forecast is in stark contrast to the heavy rain and strong winds that have wreaked havoc in Spain, Portugal and France over the past few days, a meteorological phenomenon named ‘Elsa’ that has cost seven people their lives in Spain. Temperatures on Christmas Eve and Christmas day are forecast to reach 22C in the city of Seville in Spain’s southern region of Andalusia.

In the neighbouring autonomous community of Extremadura temperatures will also go over 20C.

In Alicante on Spain’s eastern coastline the mercury could also rise to 24C. Similarly mild and sunny weather is expected across the Valencian community and Murcia. Barcelona will get a rather pleasant 17C on Christmas Eve, going up to 20C on Christmas Day, Spain’s national weather agency AEMET reported.

A similar situation is in store for the Spanish capital Madrid, where Christmas daytime temperatures will experience highs between 15 and 18C over the two-day festive period.

The only regions that are forecast to get some rain over Christmas are the Canary Islands and Spain’s northeastern regions of Galicia and Asturias.