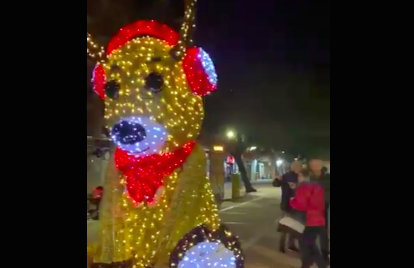 With Christmas celebrations firmly underway in Catalonia, residents may have hoped for a break from all the political talk and troubles that have plagued the region in 2019.

Unfortunately, when it comes to Catalonia’s independence debate, it seems that even inanimate Christmas decorations want to have a say in the matter.

That’s how residents of the town of Viladecans must have felt last weekend when a giant inflatable reindeer started shouting “¡Viva España!” (Long live Spain) and “España es grande” (Spain is great) through its loudspeaker.

The Twitter user who posted the footage online initially said he was behind the prank, only to later deny that it had been him, arguing instead that “it deserved to go viral because the inflatable had been shouting the slogans since Friday December 20th.

The anonymous hacker behind the festive wind-up decided to confuse passersby even further by getting the inflatable reindeer to address them directly (Come here, girl with the umbrella!), asking them for presents (Buy me an iPhone)! and even yelling “¡Muerte a los rojos!” (Death to communists!).

In fact, the blowup reindeer’s rhetoric turned very fascist at one point, with messages such as “Moroccans, Rumanians and low lives, leave this town!”.

Authorities in Viladecans, a town 30 minutes from central Barcelona, have so far been unable to stop the giant reindeer from broadcasting the inflammatory messages.