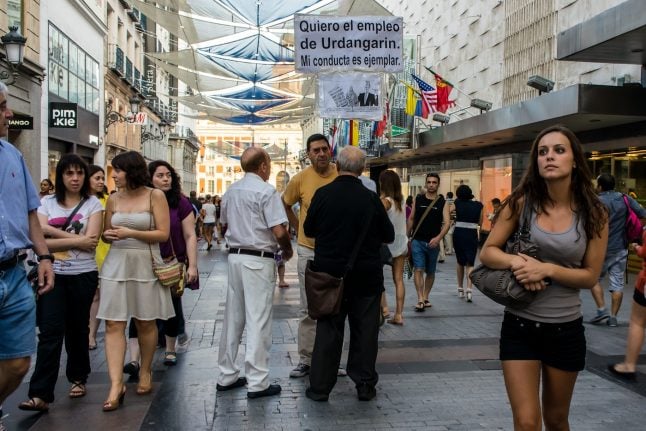 Spaniards are less well-off than a decade ago, the country’s leading banking authority reported on Thursday in its new Family Finances Survey.

The study acts as further evidence that, despite Spain’s apparent recovery from the 2008-2014 financial crisis which saw unemployment reach almost 27 percent, Spaniards are still affected by a fragile job market and hemorrhaging property sector.

The Bank of Spain’s research focused on average incomes and overall wealth of families in different ten-year age groups, from under 35s all the way up to over 74s.

Across the spectrum, Spaniards earned less and had less money and assets in their name in 2017 than they did in 2008.

Here’s the breakdown for annual income disparities for family units where one or both adults work:

The figures are disheartening overall, and especially for the youngest families, who have seen their earnings plummet by 22 percent compared to an average drop of 1.5 percent for the other age groups.

Unfortunately for this demographic, the following figures relating to the amount of wealth accumulated – in finances or assets (not including debts) – is even more worrying:

Again Spaniards across all age groups have considerably less wealth but it’s family units under 35 who have seen their savings pulverized from an average €81,700 in 2008 to €5,300 in 2017.

The Bank of Spain points to property as being central to this huge drop in wealth among Spain’s young population.

Under 35s are renting much more and buying far less. Whereas in 2008 families in that age group who had bought a property represented 13.3 percent, the figure stood at 7.6 percent in 2017.

Older Spaniards own the majority of rental properties in Spain and consequently they are the ones letting them out in huge numbers to younger people who can’t get a mortgage or afford to buy a home.

According to Spain’s Youth Council, renting is still burning a huge hole in under 35s’ pockets, accounting for an average 94 percent of their monthly wages.

This ties in closely with earlier research by the Bank of Spain which suggested rent prices have risen 30 times faster than wages since 2013.

Spain’s leading banking entity has expressed concern over how this trend will affect the next generation when it comes to having enough saved up to maintain decent living standards when they reach retirement.

How wealthy are Spaniards compared to other nationalities?

That puts it behind other European countries such as Luxembourg, Switzerland, Norway, Ireland, Iceland, Denmark, the Netherlands, Sweden, Austria, Finland, Germany, Belgium, France, the United Kingdom, Italy and Malta.

In terms of Spaniards' purchasing power parity (PPP) which also takes into account living costs, the IMF ranked Spain 30th globally in 2018, 33rd in 2017 according to the World Bank.