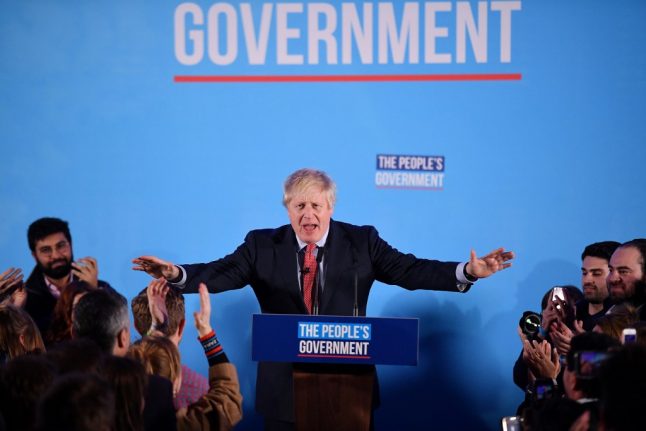 The victorious prime minister insisted on Friday he would do everything to get Brexit done by January 31st.

Brexit he said was now the “irrefutable, irresistible, unarguable will of the British people”.

There will be many Britons in Europe who might still dispute that but most seemed to accept on Friday, some for the first time, that the UK will leave the EU and they would no longer be European citizens.

Many Brits in Spain took to social media groups to express sadness, shock and anger that the UK, or at least England and Wales, had effectively voted for Brexit once again.

Their reactions echoed those that followed the shock 2016 referendum result.

“We moved to Spain following the referendum vote. We are beyond devastated. This doesn’t just affect us, but our children & grandchildren,” said Helen Dolby on The Local Spain facebook page.

“The UK had just voted to self destruct – a very very sad day. On a par with the Referendum disaster,” commented Patrick Bastow.

Steve Eleftheriou wrote: “It's arguably worse than the EU2016 referendum as this time it was done with full knowledge” Kalba Meadows from British in Europe told The Local: “It's a devastating morning for all of us – we know that people are shocked and angry and hurting, as we are ourselves after three and a half years of campaigning.

“Yesterday there was still a glimmer of hope that we might remain in the EU; today that's gone – it's a true Friday the 13th. So today is a day to mourn and take stock.”

But Meadows and others who have been sticking up for the rights of Britons in Europe have stressed there is at least something positive to take from Boris Johnson's win.

Much of the uncertainty that has blighted the lives of many and impacted the health of some will soon come to an end.

“There is some not so bad news too – our future rights will now be protected by the Withdrawal Agreement, and we no longer have the spectre of a no deal Brexit that has kept us up at night for so long,” she said.

“It's not perfect – we lose our voting rights and our right to free movement for example – but it's lifetime protection of the majority of the rights we have now, and it'll stand even if the government doesn't reach a trade deal with the EU. And of course there will be no change for us until the end of the transition period.”

For many it was time for Brits in the EU to face the music.

“There is no other way out than Brexit happening on January 31st,” Germany-based British political commentator Jon Worth told The Local on Friday morning. “Nothing can stop this now.”

The hope of Brexit not happening “that stayed alive to a certain extent for the last three and a half years since the referendum is now definitively extinguished,” Worth said.

Justine Wallington from the campaign group Remain in France Together (RIFT) also suggested that there was a plus side to the “unpleasant shock” of the result.

“We mourn the imminent loss of our European citizenship, however, with respect to citizens' rights for those who are already resident before any cut off date (probably end of 2020), we face an improved situation compared to last October.

“Previously, current residents were facing a “no-deal” scenario and having to rely on the French Decree (Spain  has a similar one called the Royal Decree) and now we are probably looking at the Withdrawal Agreement being agreed. This should secure many of our rights in an international treaty for the rest of our lives.

“Some rights likely to be retained are the S1 medical cover, pension uprating, pension aggregation and more. Some rights we will probably lose – voting rights in local and EU elections at the end of January and onward freedom of movement at the end of the transition period.”

That transition period is due to end in December 2020 – just 12 months from now – although it may well be extended despite Boris Johnson having vowed not to.

Clive Williams said: “For me personally this gives a way ahead with a withdrawal agreement that should protect my rights having decided to live in France 18 years ago. So now the uncertainty is gone, some bureaucracy is required and I can continue to live in a tolerant, beautiful country.”

Others were gutted at what lay ahead.

Ann Hutchins said:  “I'm very sad as we, my partner and I live in our camping car , and spend 90 percent of our time in Spain. We don't have a home in England and are now feeling devasted at having to be forced to go back to a country that we don't even like for six months a year .It's a very worrying time for us as we truly love Spain.”

Barbara Saunders:  “I feel sad that we have said goodbye to our European friends. I hope that won’t make us the lonely kid in the playground, but I fear it might. I feel dreadfully sorry for the retired folk living in Europe that cannot obtain health cover once the mutual agreement with the U.K. ends six months after brexit. A lot of them simply cannot afford to move back to the U.K. and will simply have to muddle on with no medical help. Maybe their families in the U.K. can post supplies to them but it looks grim for them. Good luck UK”

Many spoke of the steps they will now take to secure their future in the EU, even if meant having to overcome some bureaucratic and linguistic hurdles.

“Spanish citizenship here we come. My kids were born here and will have their rights stripped away from them by populist, racist liars. No choice,” said Graham Hunt from Valencia on The Local Spain facebook page.

Jennifer Benson added: “I feel cross that my teenage daughter who was born here to British parents is being forced to apply for Spanish citizenship just so she can enjoy freedom of movement in the EU once she finishes her university studies.”

More lovely bureaucracy and having documents translated, printed and signed in triplicate for me!

While many Brits spoke of being grateful they were living in the EU given the Brexit chaos that has engulfed the UK, one reader Thomas Lam was not looking forward to the future.

“I am so genuinely disheartened and devastated by the result of the election,” he said. “I'm moving back to the UK in the next few days, but now I'm not sure if I want to.”