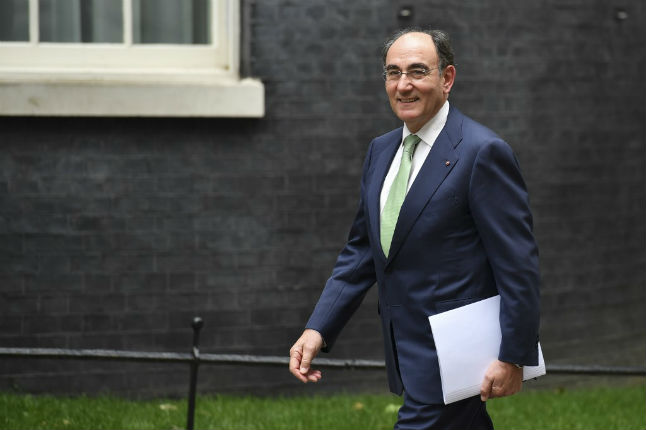 Iberdrola chief Ignacio Galan in London to meet then UK Prime Minister Theresa May. Photo: Ben Stansall/AFP
Government ministers and the royal family have been embarrassed in recent years by covert recordings made by retired police chief Jose Manuel Villarejo, who is now behind bars awaiting trial over decades of alleged dirty work for firms or rich individuals.
The scandal has recently ensnared the leaders of Spain's biggest companies, starting with Francisco Gonzalez, long-time chairman of BBVA, who is accused of hiring Villarejo in 2004 to spy on rivals to halt a takeover bid by construction firm Sacyr.
Gonzalez, who retired late last year and also stepped down as the bank's honorary chairman in March, is one of 10 BBVA officials under investigation as part of the probe.
BBVA, Spain's second-largest bank, is also under formal investigation.  Accused of corruption and unlawful disclosure of secrets, Gonzalez testified Monday at a Madrid court as part of the probe, later telling reporters that the bank and its management had always acted with “integrity”.
Iberdrola and ACS
Further covertly-recorded conversations leaked to the press this week have turned the spotlight on Ignacio Galan, chief executive of Spain's top energy firm, Iberdrola.
According to details published Monday in two online newspapers, Galan allegedly used Villarejo's services around 2009 to gather compromising personal information on Real Madrid boss Florentino Perez, who also heads construction giant ACS.
The suspected aim was to stop ACS from mounting a hostile takeover of Iberdrola.
Perez immediately vowed to take legal action against those responsible for the alleged spying, including the “president of Iberdrola and members of his entourage”.
At the same time, ACS said board member Manuel Delgado had resigned. The firm did not say why but one of the leaked recordings included a compromising conversation, allegedly between Delgado and Villarejo.
Following an internal inquiry, Iberdrola in October acknowledged that between 2004 and 2017, it had on 17 different occasions used the services of Cenyt, a business company run by Villarejo that in theory carried out market studies.
Last month, Iberdrola opened a new internal probe following fresh media revelations.
“The scope of Villarejo's spying, which touched as much on the business world as on politics.. leaves a bitter taste,” even if it is “not a huge surprise,” the Cinco Dias business daily wrote Tuesday.
An unassuming spy
Villarejo, 68, joined the police in 1973, two years before the death of Spain's longtime dictator General Francisco Franco.
For decades, the stocky, bespectacled man with a penchant for flat caps secretly used recorders in his informal chats with politicians, judges, business people, police officers and prosecutors. He allegedly earned considerable money by threatening or blackmailing people.
Under the government of former conservative premier Mariano Rajoy (2011-2018), information obtained by Villarejo is believed to have been used against political rivals.
Even Spain's former King Juan Carlos I has not been spared.
In a recording allegedly made by Villarejo and leaked in 2018, the monarch's former mistress Corinna zu Sayn-Wittgenstein claimed he had pocketed money from a high-speed train contract with Saudi Arabia.
In a statement published in August, Villarejo threatened to make further revelations about Spain's big firms.