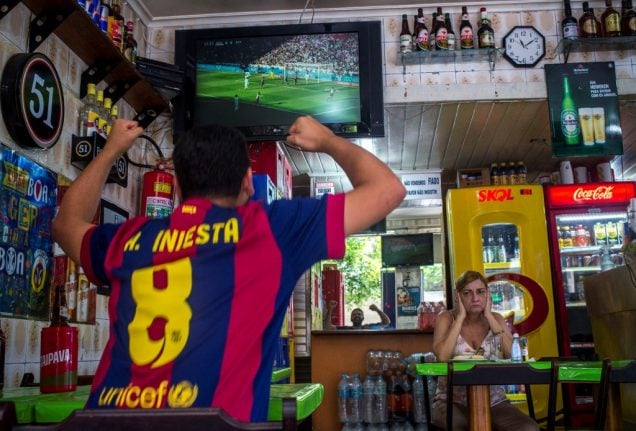 Walk into your local boozer in Spain any given evening and chances are there’ll be a group of men sitting at the bar, cañas (beers) at hand, with their eyes glued to the TV screen in the top corner.

“El fútbol” will be showing. This is of course ‘balonpié’-crazy Spain, by far the most popular sport in the country, and one that Spaniards tend to prefer to watch in the company of their friends in a public place rather than at home, as is the case with most social habits here.

Around three million Spaniards watch football in bars, and although this works as a major clientele draw for bar and restaurant owners, recent studies show that more than 50,000 of them aren’t really making a profit from their TV sports subscriptions. That’s primarily because the main telecoms companies – Movistar, Vodafone and Orange – charge them around €300 a month to have the right to broadcast football in a public place.

Each one of the broadcasters offers its own particular package with the rights to different football leagues only they can show, so for bars that specialize in showing international football and sport, monthly subscription fees near €1,000.

In the case of Movistar’s LaLiga TV Bar – the only TV channel with a license to show Spanish first division matches in a public place – their justification for the pricey fee is that the average football aficionado will spend €13 during the two and half hours they stay at the bar.

The reality however suggests that customers don’t spend as much as that, meaning that bars are either breaking even or making losses rather than a profit from showing football on their TV screens.

According to SES Astra, a company that specializes in monitoring TV signals via satellite, 57,000 out of the 120,000 bars, cafés and restaurants in Spain with a TV actually broadcast content illegally, usually via pirate websites.

Spanish authorities are starting to clamp down on the illicit practices, spurred on by complaints from the TV multinationals. “Illegally streaming or broadcasting football can result in a piracy lawsuit being opened up against you, with fines of more than €6,000 and the temporary closure of your establishment,” Movistar has warned bar owners across the country.

“It can even result in prison sentences for the culprits,” SES Astra director Luis Sahún warned.

With exorbitant sports TV licenses unlikely to be reduced and increasingly stringent rules surrounding illegal broadcasting in Spain, many cash-strapped bar owners are now faced with a difficult choice.

Is it the end of football showing in the background in Spanish bars?

Probably not, but it may be a rarity rather than a mainstay.